Walking to the Bus-Rider Blues (Paperback) 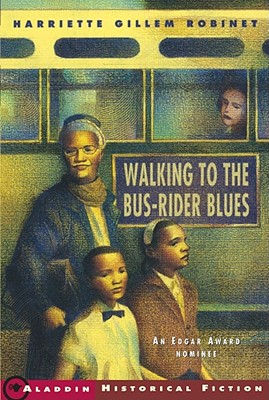 Walking to the Bus-Rider Blues (Paperback)


Email or call for price.
"Oh, I'm singing the bus-rider blues,
the Alabamy bus-rider blues.
I got me a feeling, deep down inside,
It ain't never ever gonna be the same."
During the Alabama bus boycott, six months after Rosa Parks made her famous bus protest, Alfa Merryfield and his family struggle to pay the rent. But someone keeps stealing their rent money -- and now someone is accusing them of stealing!
With only a few days left before rent is due, Alfa and his sister, Zinnia, know they don't have much time. To solve this mystery, they must "walk the walk and talk the talk of nonviolence" that Martin Luther King, Jr. and other leaders preach -- and what they discover may be more than they dreamed...
Harriette Gillem Robinet was born in Washington, DC, and spent her childhood summers in Arlington, Virginia where her mother’s father had been a slave under General Robert E. Lee. She attended the College of New Rochelle in New York and received graduate degrees in microbiology from Catholic University of America in Washington, DC. The author of several award-winning books for children, Ms. Robinet makes her home in Oak Park, Illinois.

Raúl Colón is the award-winning illustrator of many picture books, including Draw!, an ALA Notable Book and recipient of the International Latino Book Award; Imagine!, an ALA Notable Book, a New York Public Library Best Book for Kids, and a BookPage Best Book; Susanna Reich’s José! Born to Dance; Angela’s Christmas by Frank McCourt; and Jill Biden’s Don’t Forget, God Bless Our Troops. Mr. Colón lived in Puerto Rico as a young boy and now resides in New City, New York, with his family.