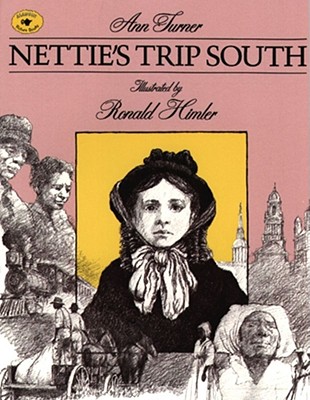 
Usually Ships in 1-5 Days
Based on the diary of the author's great-grandmother, this is a poignant and compelling picture book that looks at slavery through the eyes of a young girl.

In a letter to her friend, Nettie remembers her trip to the pre-Civil War South. She remembers the sweet cedar smell in the air and the sun pressing on her head. But she also remembers Tabitha, the slave at the hotel who doesn’t have a last name, and she remembers the heaps of rags the slaves use for beds.

Most of all, though, she remembers the slave auction where people were bought and sold like sacks of flour. Nettie can't forget these images, and she can't help but wonder what life would be like if she were a slave.
Ann Turner is an award-winning screenwriter and director, avid reader, and history lover. She is drawn to salt-sprayed coasts, luminous landscapes, and the people who inhabit them all over the world. She is a passion­ate gardener. Her films include the historical feature Celia, starring Rebecca Smart—which Time Out listed as one of the fifty greatest direc­torial debuts of all time; Hammers Over the Anvil, starring Russell Crowe and Charlotte Rampling; and the psychological thriller Irresistible starring Susan Sarandon, Sam Neill, and Emily Blunt. Ann has lectured in film at the Victorian College of the Arts. Returning to her first love, the written word, in her debut novel The Lost Swimmer, Ann explores themes of love, trust, and the dark side of relationships. Her second novel, Out of the Ice, a mystery thriller set in Antarctica, was published to great acclaim in Australia and will be available in the United States in 2018. Ann was born in Adelaide and lives in Victoria. Visit Ann’s website at AnnTurnerAuthor.com.

Ron Himler lives in Tucson, Arizona. An interest in American Indian culture first brought Mr. Himler to the southwest, and his work often features western subjects as well as historical themes. His paintings are frequently exhibited in galleries in the southwest. Ron Himler has illustrated more than seventy-five children’s books.