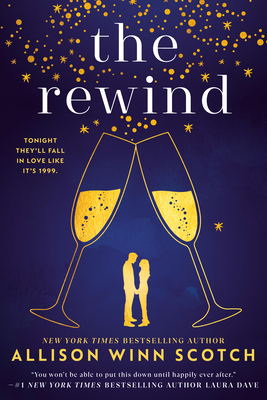 
On Our Shelves Now
A Good Morning America Buzz Pick
One of Amazon's Best Romances of November!

Two exes wake up together with wedding bands on their fingers—and no idea how they got there. They have just one New Year’s Eve at the end of 1999 to figure it out in this big-hearted and nostalgic rom-com from New York Times bestselling author Allison Winn Scotch.

When college sweethearts Frankie and Ezra broke up before graduation, they vowed to never speak to each other again. Ten years later, on the eve of the new millennium, they find themselves back on their snowy, picturesque New England campus together for the first time for the wedding of mutual friends. Frankie’s on the rise as a music manager for the hottest bands of the late ’90s, and Ezra’s ready to propose to his girlfriend after the wedding. Everything is going to plan—they just have to avoid the chasm of emotions brought up when they inevitably come face to face.

But when they wake up in bed next to each other the following morning with Ezra’s grandmother’s diamond on Frankie’s finger, they have zero memory of how they got there—or about any of the events that transpired the night before. Now Frankie and Ezra have to put aside old grievances in order to figure out what happened, what didn’t happen...and to ask themselves the most troubling question of all: what if they both got it wrong the first time around?
Allison Winn Scotch is the New York Times bestselling author of eight novels, including Time of My Life, In Twenty Years, and Cleo McDougal Regrets Nothing. A cum laude graduate of the University of Pennsylvania, where she studied history and marketing, Winn Scotch now lives in Los Angeles.
“A charming love story rich with nineties nostalgia, The Rewind is Allison Winn Scotch’s best book yet.”—#1 New York Times bestselling author Emily Giffin

“The Rewind is as much an endearing love story about the one that got away as it is a love letter to all things 90s, including Doc Martens, Y2K and dial-up Internet. Fresh, original and compelling, this book is Allison Winn Scotch at her absolute best.”—USA Today bestselling author Colleen Oakley

“Sassy, engaging and warm, The Rewind is a sharp and witty rom-com about the road not taken—and the people who find their way back to us anyway. Ezra and Frankie are magic together. You won’t be able to put this down until happily-ever-after.”—#1 New York Times bestselling author Laura Dave

“A dazzling second-chance romance…This is the Y2K new-millennium story I didn’t know I needed.”—Washington Independent Review of Books

"Nineties nostalgia is alive and well in this moving story of a lost first love and second chances. Readers will enjoy piecing together both the story of the forgotten night and the reasons behind the relationship’s disastrous first ending."--Library Journal