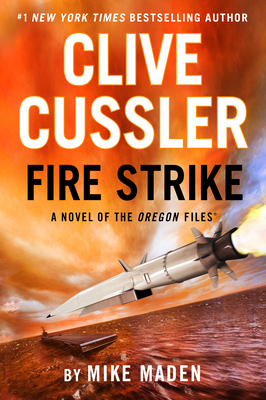 This is book number 17 in the The Oregon Files series.

Juan Cabrillo and the crew of the Oregon are back in the next installment of the #1 New York Times bestselling series.
Clive Cussler was the author of more than eighty books in five bestselling series, including Dirk Pitt®, NUMA Files®, Oregon Files®, Isaac Bell®, and Sam and Remi Fargo®. His life nearly paralleled that of his hero Dirk Pitt. Whether searching for lost aircraft or leading expeditions to find famous shipwrecks, he and his NUMA crew of volunteers discovered and surveyed more than seventy-five lost ships of historic significance, including the long-lost Civil War submarine Hunley, which was raised in 2000 with much publicity. Like Pitt, Cussler collected classic automobiles. His collection featured more than one hundred examples of custom coachwork. Cussler passed away in February 2020.

Mike Maden is the author of Clive Cussler's Hellburner, the critically acclaimed Drone series, and four novels in Tom Clancy’s #1 New York Times bestselling Jack Ryan Jr. series. He holds both a master’s and Ph.D. in political science from the University of California at Davis, specializing in international relations and comparative politics. He has lectured and consulted on the topics of war and the Middle East, among others. Maden has served as a political consultant and campaign manager in state and national elections, and hosted his own local weekly radio show for a year.