Most Perfect You (Library Binding) 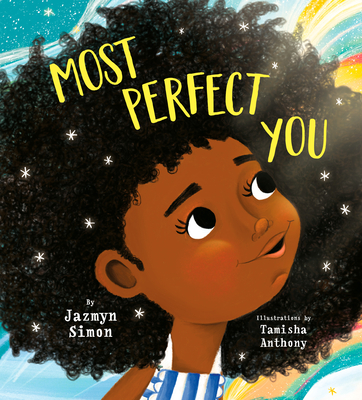 Most Perfect You (Library Binding)


Usually Ships in 1-5 Days
Jazmyn Simon's debut is a moving love letter to children struggling to accept themselves inside and out—exactly as they are. This gorgeous picture book was inspired by a conversation between the author and her daughter.

I was shown all the smiles in the entire world. I looked at all of the many bright smiles until I found my favorite: your smile.

After comparing herself to other little girls, Irie confides in her mama that she feels something is wrong with her, that she’s not perfect as she is. And so Irie’s mama tells the magical story of how Irie was intentionally and wonderfully made. In fact, Irie is made up of all her mother's favorite things: sparkling eyes, a bright smile, and a kind heart.

Actor and activist Jazmyn Simon's tender picture book emphasizes the unique beauty and strength of all children, encouraging them to love their most perfect selves.
Jazmyn Simon is an actor, activist, and mother. Raised in northern California, Jazmyn began pursuing acting during college at the University of Nevada. She later moved to Chicago and joined improv troupe Second City. Jazmyn rose to fame on HBO’s hit dramedy “Ballers,” starring The Rock. On the big screen, she’s starred in Tyler Perry’s “Acrimony,” among many other films. Most recently, Jazmyn appeared in the Netflix series “Raising Dion,” which has been renewed for a second season. Jazmyn lives in L.A. with her husband, actor Dulé Hill, and their two children. This is her first book. Visit Jazmyn on Instagram @jazmynsimon.

Tamisha Anthony is a freelance illustrator for various clients, such as Macmillan Publishers, New York University, and Chronicle Books. She has been an educator for the past several years teaching at institutions such as the New-York Historical Society and the Harlem School of the Arts. Tamisha received her undergraduate degree in visual arts from Rice University and her master’s in computer art from the School of Visual Arts. She sells paper goods and products at Renegade Craft Fair and Artists & Fleas, and on Etsy under the name PuffedSleeves. This is her first book. Visit Tamisha online at tamishaanthony.com, on Twitter @tamishaanthony.com, and on Instagram @tamisha.anthony.
"A lovely choice for those looking for books about accepting differences, affirming children, and self-acceptance." —Booklist

"This sweet, imaginative tale highlights the importance of parental love in boosting children’s self-esteem and will be a touching read-aloud for families who have struggled with issues of fitting in." —Kirkus Reviews