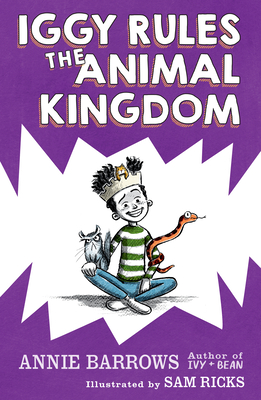 This is book number 5 in the Iggy series.

The fifth and final book in the Iggy series about the lovable troublemaker, perfect for fans of The Terrible Two series.

Grownups make no sense at all

They’re nuts about babies, but they tell their 9-year-olds to be more mature. They complain constantly about how old they are, and then they tell their kids to grow up. So when Iggy’s mom and dad say he can’t have a puppy because he’s not mature and responsible, Iggy develops an excellent plan to prove them wrong.

Like any great plan, it involves secrecy, strategy, and a chinchilla.

There’s also some screaming, but that’s not Iggy’s fault.

Is there a puppy, too? You’ll have to read the book to find out.
Even though Annie Barrows (she/her) is (very) mature and responsible, she has no pets. Why, you ask? Because one time she babysat a hamster, and it died. Two months later, the same people asked her to babysit their new hamster. Guess what. It died, too! If you would like her to babysit your hamster, email annie@anniebarrows.com.

PS. She didn’t do anything to them. They just died.

Sam Ricks (he/him) is the illustrator of the Geisel Award-winner Don't Throw it to Mo! and the Stinkbomb and Ketchup-Face books. He is grateful his parents let him live through a surprising number of Iggycidents. He lives with his family in Utah. Twitter @Samuelricks / Website samricks.com