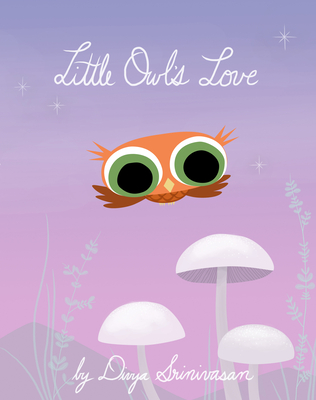 “Little Owl loves so much, and there is much to discover in the forest. The illustrations bring those discoveries right to you. I’m not sure I love mushrooms as much as Little Owl, but I do know I love to discover with Little Owl — so will you.”
— Carolyn Roys, Anderson's Bookshops, Naperville, IL

The star of Little Owl's Night returns to find love in his beloved nighttime forest.

"What do I love?" Little Owl thought.
There were so many things. . .

Gliding along on a quiet night, Little Owl looks for the things that make him happy--shimmering stars, winking fireflies, listening to the cricket song, and most of all, spending time with his good friends. Lyrical and deeply heartfelt, Little Owl's Love is perfect for Valentine's Day and is a love letter to the natural world on a child's level.
Divya Srinivasan lives in Austin, Texas. Her illustrations have appeared in The New Yorker, and she has done work for This American Life, They Might Be Giants, Sundance Channel, Sufjan Stevens, and Weird Al Yankovic, among others. Divya was also an animator on the film Waking Life. She is the author and illustrator of the picture books What I Am, Little Owl's Night, Little Owl's Day, Little Owl's Snow, and Octopus Alone, and she illustrated the picture book Cinnamon, written by Neil Gaiman. More of Divya's work can be seen at pupae.com.
* "The writing is spare and evocative, and the art is striking. Against a night setting, the colors of the animals jump off the page in all their beauty. Children will love the characters and the beautifully illustrated story." --School Library Journal, starred review