The Most Likely Club (Paperback) 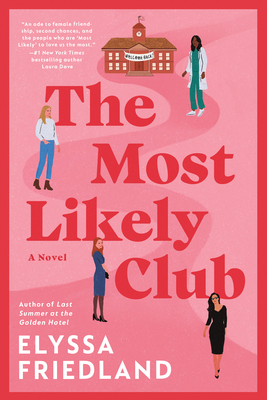 The Most Likely Club (Paperback)


On Our Shelves Now
A Good Morning America Buzz Pick

At their milestone high school reunion, a group of friends make a pact to finally achieve their high school superlatives one way or another, in the lively new novel from the acclaimed author of Last Summer at the Golden Hotel.

In 1997, grunge is king, Titanic is a blockbuster (and Blockbuster still exists), and Thursday nights are for Friends. In Bellport, Connecticut, four best friends and high school seniors are ready to light the world on fire. Melissa Levin, Priya Chowdhury, Tara Taylor, and Suki Hammer are going places. Their yearbook superlatives confirm it: Most Likely to Win the White House, Cure Cancer, Open a Michelin-Starred Restaurant, and Join the Forbes 400.

Fast forward twenty-five years and nothing has gone according to plan as the women regroup at their dreaded high school reunion. When a forgotten classmate emerges at the reunion with a surprising announcement, the friends dig out the yearbook and rethink their younger selves. Is it too late to make their dreams come true? Fueled by nostalgia and one too many drinks, they form a pact to push through their middle-aged angst to bring their teenage aspirations to fruition, dubbing themselves the “Most Likely Girls.”

Through the ensuing highs and lows, they are reminded of the enduring bonds of friendship, the ways our childhood dreams both sustain and surprise us — and why it’s deeply uncool to peak in high school.
Elyssa Friedland is the acclaimed author of Last Summer at the Golden Hotel, The Floating Feldmans, The Intermission, and Love and Miss Communication. Elyssa is a graduate of Yale University and Columbia Law School and currently teaches novel writing at Yale. She lives with her husband and three children in New York City, the best place on earth.
"Perfect for fans of Emily Henry and Gail Honeyman, The Most Likely Club is a celebration of embracing all the ways your life derails—and the friends who help you along the way."—PureWow

“Endearing and immensely readable, Elyssa's Friedland's The Most Likely Club is an ode to female friendship, second chances, and the people who are 'Most Likely' to love us the most.”—Laura Dave, #1 New York Times bestseller of The Last Thing He Told Me

“Elyssa Friedland writes with heart, depth and humor in this story of four friends exploring what they wanted in high school, and what they have today. Utterly delightful and uplifting!”—New York Times bestselling author Kristan Higgins

“A fun and satisfying romp through the journey from imagining we will have it all to realizing we don’t want it.”—New York Times bestselling author KJ Dell’Antonia

“A hilarious, delectable, and much-needed time machine back to the nineties.”—Jo Piazza, bestselling co-author of We Are Not Like Them

"A high school reunion sparks new life for a group of best friends in Elyssa Friedland's winning novel The Most Likely Club.… Through their triumphs and failures, the group cherishes the bond of their friendship, and honor their childhood selves in this hilarious and heartwarming tale."—Popsugar

"We love this book about a group of girls who graduated in the ’90s and are coming up on a milestone high school reunion. Full of nostalgia and surprises, the “Most Likely Girls” will discover that it’s never too late to make their dreams come true."--Medium.com

"In the delightful latest from Friedland (Last Summer at the Golden Hotel), four women celebrate their 25th high school reunion...Friedland keeps up a steady stream of clever lines to convey the women's mix of excitement and dread over the big event...Overall, this strikes a fine balance between lighthearted and serious."—Publishers Weekly

Praise for Last Summer at the Golden Hotel

"Two families agonize over whether to sell their once-successful Catskills resort. Last Summer at the Golden Hotel promises snark, sass, and sunshine-filled fun."—Bustle

"Friedland brings two families full circle over the fate of a storied hotel they've owned together for three generations...Old tensions and new romances arise as they decide if the nostalgia and storied legacy of the hotel can save it, or if they're having their last summer at the Golden...Episodes of intergenerational disconnect contrasted with unshakeable family bonds make Last Summer at the Golden Hotel a great choice for fans of Schitt's Creek and feel-good family dramedies."—Shelf Awareness

“You will laugh out loud at the antics of two delightfully dysfunctional families as they fight, share secrets, and fall in love in the once-prosperous Catskills hotel that they own. Once again, Friedland brilliantly wields her rapier wit – if Dorothy Parker and Joan Rivers wrote a book, this would be it!”–Fiona Davis, New York Times bestselling author

"In The Last Summer at the Golden Hotel, Elyssa Friedland creates a broad cast of characters who are at once touching and hilarious. Their fears, their secrets, and their dreams come together in a moving story that balances nostalgia for the past and hope for the future. A perfect book for a family book club."—Jill Santopolo, New York Times bestselling author

“Long known for her humor and wit, Elyssa Friedland has penned a charmer of a novel in Last Summer at the Golden Hotel, a story about two families who own a resort in the Catskills, which was a crown jewel in its heyday but is now in decline.  Fans of Mrs. Maisel and Dirty Dancing will revel in the nostalgia of a bygone era and the richness of this intergenerational tale, which manages to be smart, funny, honest and poignant all at the same time.”—Pam Jenoff, New York Times bestselling author

“Chock full of charm and wit, Elyssa Friedland’s Last Summer at the Golden Hotel is the only family drama you need this year! Set in a ramshackle Catskills hotel and featuring a vibrant cast of characters, it’s a laugh out loud funny novel with a heart of gold."–Karma Brown

"Prepare to laugh. Take a trip to the Catskills with Last Summer at the Golden Hotel and bask in the hilarity and chaos that make Elyssa Friedland the queen of the family drama."–Jane L. Rosen