Against All Odds: A True Story of Ultimate Courage and Survival in World War II (Hardcover) 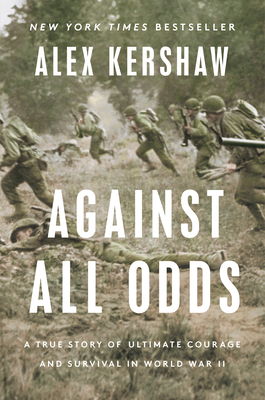 Against All Odds: A True Story of Ultimate Courage and Survival in World War II (Hardcover)


On Our Shelves Now
*The instant New York Times bestseller*

The untold story of four of the most decorated soldiers of World War II—all Medal of Honor recipients—from the beaches of French Morocco to Hitler’s own mountaintop fortress, by the national bestselling author of The First Wave

“Pitch-perfect.”—The Wall Street Journal • “Riveting.”—World War II magazine • “Alex Kershaw is the master of putting the reader in the heat of the action.”—Martin Dugard

As the Allies raced to defeat Hitler, four men, all in the same unit, earned medal after medal for battlefield heroism. Maurice “Footsie” Britt, a former professional football player, became the very first American to receive every award for valor in a single war. Michael Daly was a West Point dropout who risked his neck over and over to keep his men alive. Keith Ware would one day become the first and only draftee in history to attain the rank of general before serving in Vietnam. In WWII, Ware owed his life to the finest soldier he ever commanded, a baby-faced Texan named Audie Murphy. In the campaign to liberate Europe, each would gain the ultimate accolade, the Congressional Medal of Honor.

Tapping into personal interviews and a wealth of primary source material, Alex Kershaw has delivered his most gripping account yet of American courage, spanning more than six hundred days of increasingly merciless combat, from the deserts of North Africa to the dark heart of Nazi Germany. Once the guns fell silent, these four exceptional warriors would discover just how heavy the Medal of Honor could be—and how great the expectations associated with it. Having survived against all odds, who among them would finally find peace?
Alex Kershaw is a journalist and a New York Times bestselling author of books on World War II. Born in York, England, he is a graduate of Oxford University and has lived in the United States since 1994.
Praise for Against All Odds
“Kershaw continues to find fresh ways to look at [World War II]. . . . It’s the perfect summer read for any military history buff.”—Foreign Policy

“Against All Odds achieves a pitch-perfect balance between a ground view of combat and the seismic forces that drew men like [Maurice] Britt and [Audie] Murphy to the killing grounds of Europe. Its prose is sharp, efficient, and entertaining, its characters thoroughly human.”—The Wall Street Journal

“Against All Odds is a timely reminder of the horrors of war and the valor and sacrifices of the Greatest Generation.”—Booklist

“In his latest book of popular World War II history, bestselling author Kershaw tells the stories of four Americans who won the Medal of Honor and lived postwar lives that sometimes kept them in the public eye. . . . Realistic portraits of four American superheroes.”—Kirkus Reviews

“Alex Kershaw is the master of putting the reader in the heat of the action. Against All Odds is vivid and compelling, a crisp narrative about heroism, war, and going above and beyond the call of duty.”—Martin Dugard, #1 New York Times bestselling coauthor of Killing the Mob and national bestselling author of Taking Paris

“Alex Kershaw understands what makes soldiers fight: their devotion to the man to their left and to their right. In Against All Odds, Kershaw continues to raise the bar with an unvarnished story of heroism during World War II, and a lasting tribute to the American soldier as liberator.”—Kevin Maurer, #1 New York Times bestselling coauthor of No Easy Day and author of Rock Force

“Nobody ‘wins’ the Medal of Honor, nor is it ‘awarded.’ It is earned under fire, often at the cost of one’s life and always in the face of ferocious hostile resistance. What sort of men do such deeds? Alex Kershaw knows. In Against All Odds, the renowned master of the battle narrative takes us right into the most perilous action in North Africa; Sicily, Italy; and France alongside Maurice Britt, Michael Daly, Audie Murphy, and Keith Ware, heroes all. It’s a gripping, unforgettable story of undaunted courage in the heart of World War II.”—Lt. General Daniel P. Bolger, U.S. Army Ret., author of The Panzer Killers