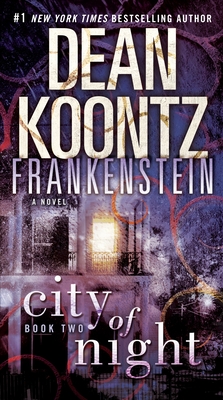 This is book number 2 in the Frankenstein series.

From the celebrated imagination of Dean Koontz comes a powerful reworking of one of the classic stories of all time. If you think you know the legend, you know only half the truth. The mystery, the myth, the terror, and the magic continue. . . .

They are stronger, heal better, and think faster than any humans ever created–and they must be destroyed. Not even Victor Helios–once Frankenstein–can stop the engineered killers he’s set loose on a reign of terror through modern-day New Orleans. Only the one-time “monster” Deucalion and his all-too-human partners, Detectives Carson O’Connor and Michael Maddison, stand in their way. But as the three race to uncover the true dimensions of an age-old conspiracy, they will discover that Victor’s new, improved models have infiltrated every level of the city’s society . . . and far beyond.
Dean Koontz, the author of many #1 New York Times bestsellers, lives in Southern California with his wife, Gerda, their golden retriever, Elsa, and the enduring spirit of their goldens, Trixie and Anna.
“Of all bestselling authors, Koontz may be the most underestimated by the literary establishment. Book after book, year after year, this author climbs to the top of the charts. Why? His readers know: because he is a master storyteller and a daring writer, and because, in his novels, he gives readers bright hope in a dark world.”—Publishers Weekly,starred review