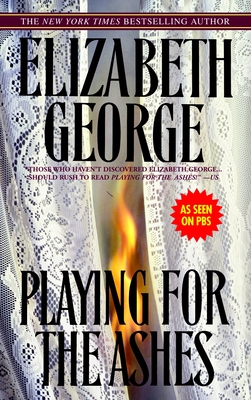 This is book number 7 in the Inspector Lynley series.

NEW YORK TIMES BESTSELLER • “Those who haven’t discovered Elizabeth George . . . should rush to read Playing for the Ashes.”—Us

“The story begins with my father, actually, and the fact that I’m the one who’s answerable for his death. It was not my first crime, as you will see, but it is the one my mother couldn’t forgive.”

Acclaimed author Elizabeth George reveals the even darker truth behind this startling confession in Playing for the Ashes, a rich tale of passion, murder, and love in which Inspector Thomas Lynley and Detective Sergeant Barbara Havers once again find themselves embroiled in a case where nothing—and no one—is really what it seems. Intense, suspenseful, and brilliantly written, Playing for the Ashes is “a treasure” (Cosmopolitan).
Elizabeth George’s first novel, A Great Deliverance, was honored with the Anthony and Agatha Best First Novel Awards and received the Grand Prix de Littérature Policière. Her third novel, Well-Schooled in Murder, was awarded the prestigious German prize for suspense fiction, the MIMI. A Suitable Vengeance, For the Sake of Elena, Missing Joseph, Playing for the Ashes, In the Presence of the Enemy, Deception on His Mind, In Pursuit of the Proper Sinner, A Traitor to Memory, and I, Richard were international bestsellers. Elizabeth George divides her time between Huntington Beach, California, and London. Her novels are currently being dramatized by the BBC.
"A perfect choice for anyone in the market for first-rate summer fiction."—The Sun, Baltimore

"Those who haven't discovered Elizabeth George ... should rush to read Playing for the Ashes."—US Magazine

"A master of the modern English mystery."—Entertainment Weekly