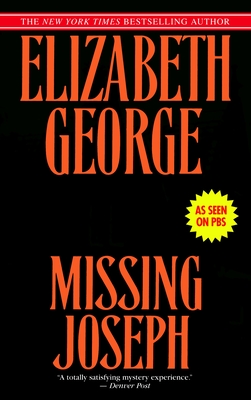 This is book number 6 in the Inspector Lynley series.

Deborah and Simon St. James have taken a holiday in the winter landscape of Lancastershire, hoping to heal the growing rift in their marriage. But in the barren countryside awaits bleak news: The vicar of Wimslough, the man they had come to see, is dead—a victim of accidental poisoning. Unsatisfied with the inquest ruling and unsettled by the close association between the investigating constable and the woman who served the deadly meal, Simon calls in his old friend Detective Inspector Thomas Lynley. Together they uncover dark, complex relationships in this rural village, relationships that bring men and women together with a passion, with grief, or with the intention to kill. Peeling away layer after layer of personal history to reveal the torment of a fugitive spirit, Missing Joseph is award-winning author Elizabeth George's greatest achievement.
Elizabeth George’s first novel, A Great Deliverance, was honored with the Anthony and Agatha Best First Novel Awards and received the Grand Prix de Littérature Policière. Her third novel, Well-Schooled in Murder, was awarded the prestigious German prize for suspense fiction, the MIMI. A Suitable Vengeance, For the Sake of Elena, Missing Joseph, Playing for the Ashes, In the Presence of the Enemy, Deception on His Mind, In Pursuit of the Proper Sinner, A Traitor to Memory, and I, Richard were international bestsellers. Elizabeth George divides her time between Huntington Beach, California, and London. Her novels are currently being dramatized by the BBC.
"A totally satisfying mystery experience."—Denver Post

"Perhaps Ms. George's most satisfying puzzle yet...this rich, intricate novel is a perfect choice for anyone in the market for first-rate summer fiction."—The Sun, Baltimore