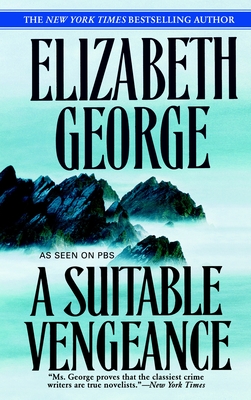 This is book number 4 in the Inspector Lynley series.

Award-winning author Elizabeth George gives us an early glimpse into the lives of Detective Inspector Thomas Lynley, forensic scientist Simon Allcourt-St. James, and Lady Helen Clyde in a superlative mystery that is also a fascinating inquiry into the crimes of the heart. Lynley, the eighth earl of Asherton, has brought to Howenstow, his family home, the young woman he has asked to be his bride. But the savage murder of a local journalist is the catalyst for a lethal series of events that shatters the calm of a picturesque Cornwall village and embroils Lynley and St. James in a case far outside their jurisdiction—and a little too close to home. When a second death follows closely on the heels of the first, Lynley finds he can't help taking the investigation personally—because the evidence points to a killer within his own family.

Praise for A Suitable Vengeance

“Elizabeth George reigns as queen of the mystery genre. The Lynley books constitute the smartest, most gratifying complex and impassioned mystery series now being published.”—Entertainment Weekly

“Ms. George can do it all, with style to spare.”—The Wall Street Journal

“George goes to the head of the genre, with class.”—People

Elizabeth George’s first novel, A Great Deliverance, was honored with the Anthony and Agatha Best First Novel Awards and received the Grand Prix de Littérature Policière. Her third novel, Well-Schooled in Murder, was awarded the prestigious German prize for suspense fiction, the MIMI. A Suitable Vengeance, For the Sake of Elena, Missing Joseph, Playing for the Ashes, In the Presence of the Enemy, Deception on His Mind, In Pursuit of the Proper Sinner, A Traitor to Memory, and I, Richard were international bestsellers. Elizabeth George divides her time between Huntington Beach, California, and London. Her novels are currently being dramatized by the BBC.

“George is a master . . . an outstanding practitioner of the modern English mystery.”—Chicago Tribune

“Ms. George can do it all, with style to spare.”—The Wall Street Journal

“A master of the modern English mystery.”—Entertainment Weekly