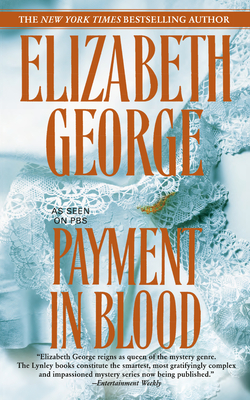 This is book number 2 in the Inspector Lynley series.

“The Lynley books constitute the smartest, most gratifyingly complex and impassioned mysteries now being published.”—Entertainment Weekly

The career of playwright Joy Sinclair comes to an abrupt end on an isolated estate in the Scottish Highlands when someone drives an eighteen-inch dirk through her neck. Called upon to investigate the case in a country where they have virtually no authority, aristocratic Detective Inspector Thomas Lynley and his partner, Detective Sergeant Barbara Havers, grapple for both a motive and a murderer.

Emotions run deep in this highly charged drama, for the list of suspects soon includes Britain’s foremost actress, its most successful theatrical producer, and the woman Lynley loves. He and Havers must tread carefully through the complicated terrain of human relationships while they work to solve a case rooted in the darkest corners of the past and the unexplored regions of the human heart.
Elizabeth George’s first novel, A Great Deliverance, was honored with the Anthony and Agatha Best First Novel Awards and received the Grand Prix de Littérature Policière. Her third novel, Well-Schooled in Murder, was awarded the prestigious German prize for suspense fiction, the MIMI. A Suitable Vengeance, For the Sake of Elena, Missing Joseph, Playing for the Ashes, In the Presence of the Enemy, Deception on His Mind, In Pursuit of the Proper Sinner, A Traitor to Memory, and I, Richard were international bestsellers. Elizabeth George divides her time between Huntington Beach, California, and London. Her novels are currently being dramatized by the BBC.
”Satisfying indeed. Elizabeth George . . . has another hit on her hands.”—Washington Post

”A vivid cast of suspects, an appealing team of sleuths . . . a country-house setting that will put readers in mind of the best of Agatha Christie. For fans of this type of puzzle, Payment in Blood is a must.”—The Cleveland Plain Dealer

”A spectacular new voice in mystery writing . . . [George] invites comparison with both P.D. James and Ruth Rendell in the psychological interest of her characters and the intricacy and ingenuity of her plotting.”—Los Angeles Times

”Complex, rich, and accomplished enough to elbow the author between P.D. James and Ruth Rendell.”—Kirkus Reviews