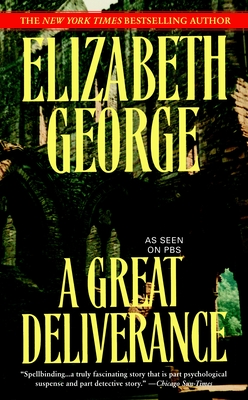 This is book number 1 in the Inspector Lynley series.

To this day, the low, thin wail of an infant can be heard in Keldale's lush green valleys. Three hundred years ago, as legend goes, the frightened Yorkshire villagers smothered a crying babe in Keldale Abbey, where they'd hidden to escape the ravages of Cromwell's raiders.

Now into Keldale's pastoral web of old houses and older secrets comes Scotland Yard Inspector Thomas Lynley, the eighth earl of Asherton. Along with the redoubtable Detective Sergeant Barbara Havers, Lynley has been sent to solve a savage murder that has stunned the peaceful countryside. For fat, unlovely Roberta Teys has been found in her best dress, an axe in her lap, seated in the old stone barn beside her father's headless corpse. Her first and last words were "I did it. And I'm not sorry."

Yet as Lynley and Havers wind their way through Keldale's dark labyrinth of secret scandals and appalling crimes, they uncover a shattering series of revelations that will reverberate through this tranquil English valley—and in their own lives as well.
Elizabeth George’s first novel, A Great Deliverance, was honored with the Anthony and Agatha Best First Novel Awards and received the Grand Prix de Littérature Policière. Her third novel, Well-Schooled in Murder, was awarded the prestigious German prize for suspense fiction, the MIMI. A Suitable Vengeance, For the Sake of Elena, Missing Joseph, Playing for the Ashes, In the Presence of the Enemy, Deception on His Mind, In Pursuit of the Proper Sinner, A Traitor to Memory, and I, Richard were international bestsellers. Elizabeth George divides her time between Huntington Beach, California, and London. Her novels are currently being dramatized by the BBC.
"Spellbinding...a truly fascinating story that is part psychological suspense and part detective story."—Chicago Sun-Times"Pure entertainment from its insidious beginning to its gripping end."—The Washington Post Book World"Exceptionally assured and impressive...highly entertaining."—Newsweek"Awesome...immediately thrusts the author into P.D. James' dark orbit."—Kirkus Reviews