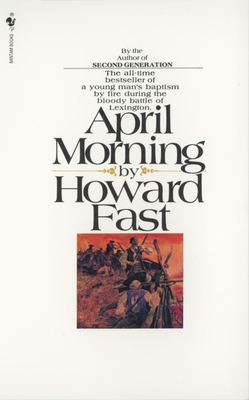 When you read this novel about April 19, 1775, you will see the British redcoats marching in a solid column through your town. Your hands will be sweating and you will shake a little as you grip your musket because never have you shot with the aim of killing a man. But you will shoot, and shoot again and again while your shoulder aches from your musket’s kick and the tight, disciplined red column bleeds and wavers and breaks and you begin to shout at the top of your lungs because you are there, at the birth of freedom—you're a veteran of the Battle of Lexington, and you’ve helped whip the King’s best soldiers...
In addition to the Immigrants novels, Howard Fast is the author of Greenwich, Being Red, My Glorious Brothers, Time and the Riddle, and Spartacus (the basis for the acclaimed film), among many other books. He has won numerous awards for his writing, including an Emmy Award, the National Jewish Book Award, and the Schomburg Award for Race Relations.
“Invites comparison with Crane’s Red Badge of Courage . . . Ithink this is an even better book.”—The New York Times