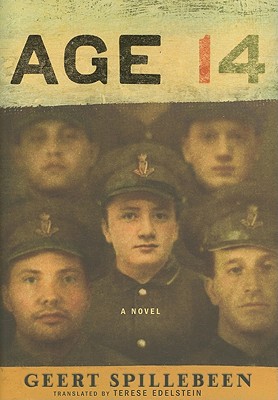 By Geert Spillebeen, Terese Edelstein (Translated by)
Email or call for price
Unavailable

It is 1913, and twelve-year-old Patrick Condon wants to escape his unexciting life in Ireland. So he hatches a plan. Not wanting to wait until he is old enough to join the army, Patrick lies and says he seventeen years old, and that his name is John Condon. Assuming the identity of his older brother, Patrick enlists.

John fits in quickly, though it is obvious that John is not 17, or even 16. That doesn’t matter. John is strong, fast, and a hard worker. He loves military life. This man’s world is just what John wanted. But when WWI begins in 1914, John gets all he has been looking for, and more he does not expect, as he is just a boy...

Geert Spillebeen lives in Izegem, Belgium, where he is a journalist and radio presenter. This is his first novel published in the United States.

"Based on historical facts, this tale of an underage soldier captures the initial excitement and ultimate disillusionment of men, young and old, fighting at the front. Spillebeen's choice to reveal Patrick's fate in the first chapter may lessen the suspense, but readers will be emotionally prepared to bear the story's conclusion. Unadorned prose expresses unsettling truths in straightforward, clear terms."--Publishers Weekly

"Young adults who have read Kipling’s Choice (BCCB 6/05) will recognize that Spillebeen is returning to a prior technique: a fact-based fictionalization of World War I events…While many novelists pack an anti-war message into their work, none surpasses Spillebeen for ripping the glamour and heroics out of the battlefield."--Bulletin