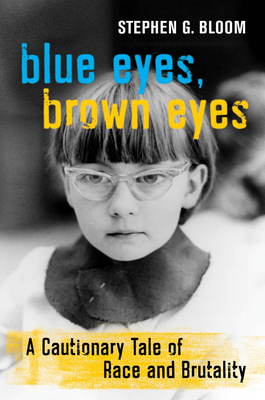 
Usually Ships in 1-5 Days
The never-before-told true story of Jane Elliott and the “Blue-Eyes, Brown-Eyes Experiment” she made world-famous, using eye color to simulate racism.

The day after Martin Luther King, Jr.’s assassination in 1968, Jane Elliott, a schoolteacher in rural Iowa, introduced to her all-white third-grade class a shocking experiment to demonstrate the scorching impact of racism. Elliott separated students into two groups. She instructed the brown-eyed children to heckle and berate the blue-eyed students, even to start fights with them. Without telling the children the experiment’s purpose, Elliott demonstrated how easy it was to create abhorrent racist behavior based on students’ eye color, not skin color. As a result, Elliott would go on to appear on Johnny Carson’s Tonight Show, followed by a stormy White House conference, The Oprah Winfrey Show, and thousands of media events and diversity-training sessions worldwide, during which she employed the provocative experiment to induce racism. Was the experiment benign? Or was it a cruel, self-serving exercise in sadism? Did it work?

Blue Eyes, Brown Eyes is a meticulously researched book that details for the first time Jane Elliott’s jagged rise to stardom. It is an unflinching assessment of the incendiary experiment forever associated with Elliott, even though she was not the first to try it out. Blue Eyes, Brown Eyes offers an intimate portrait of the insular community where Elliott grew up and conducted the experiment on the town’s children for more than a decade. The searing story is a cautionary tale that examines power and privilege in and out of the classroom. It also documents small-town White America’s reflex reaction to the Civil Rights Movement of the 1970s and 1980s, as well as the subsequent meteoric rise of diversity training that flourishes today. All the while, Blue Eyes, Brown Eyes reveals the struggles that tormented a determined and righteous woman, today referred to as the “Mother of Diversity Training,” who was driven against all odds to succeed.
Stephen G. Bloom is an award-winning journalist and author of five nonfiction books: The Audacity of Inez Burns, Tears of Mermaids, The Oxford Project, Inside the Writer’s Mind, and Postville. He is Professor of Journalism at the University of Iowa.
"A balanced view of both his abrasive subject and her notorious experiment. . . .  A clear-eyed portrayal of a controversial woman."
— Kirkus Reviews

"Intriguing and evenhanded . . . . What emerges is a rich and thought-provoking portrait of an unrepentant crusader who 'may have failed to consider fully the myriad consequences of her actions.' This immersive account offers a fresh perspective on the enduring struggle against racism."
— Publishers Weekly

"Timely and timeless, Blue Eyes, Brown Eyes: A Cautionary Tale of Race and Brutality is a unique, informative, thoughtful and thought-provoking read that must be considered in this era of the Black Lives Matter movement and the increasing successful political movements to suppress the non-white voter."

"Blue Eyes, Brown Eyes visits the unlikely place where seeds of racial reconciliation might have pierced the unyielding soil of consciousness."