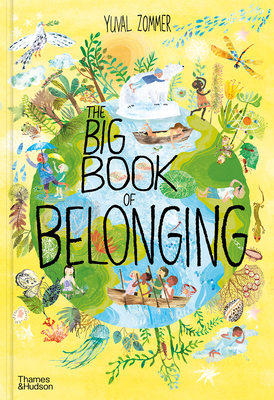 The new installment in the popular Big Book series connects young readers from around the world by emphasizing that we all belong to the same planet Earth.

The Big Book of Belonging is a timely celebration of all the ways that humans are connected to life on planet Earth. With children at the heart of every beautifully illustrated spread, this book draws parallels between the way humans, plants, and animals live and behave. We all breathe the same air and take warmth from the same sun, we grow, we adapt to the seasons, and we live together in family groups.

Readers will be fascinated to learn that instead of using words to communicate, fava beans send chemical messages through their roots, Caribbean reef squid send warnings of danger and even declarations of love by changing color, and that adorable big-eyed primates called tarsiers make calls to one another over the noise of the rainforest that are too high-pitched for predators to hear. By putting children at the heart of the book’s concept, author Yuval Zommer unites readers of the Big Book series from all corners of the world under one banner—of belonging to planet Earth. The book’s gentle message of caring for nature will inspire readers of all ages and encourage a new generation of environmentalists to flourish.

Yuval Zommer is an author, illustrator, and environmentalist based in London. He studied at the Royal College of Art and worked for many years as a creative director at leading advertising agencies before becoming an author and illustrator. His award-winning Big Book series has been published in twenty-five languages and has over one million copies in print.