Fashion and Women's Attitudes in the Nineteenth Century (Paperback) 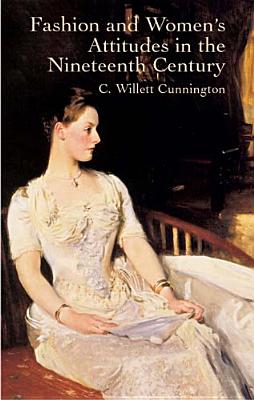 Fashion and Women's Attitudes in the Nineteenth Century (Paperback)


Usually Ships in 1-5 Days
The nineteenth century, according to C. Willett Cunnington, was a period when the cult of modesty was a tactical maneuver camouflaged as a virtue. It was also a period when euphemisms were used for such terms as -naked, - -breast, - and -leg, - and when underclothing was vaguely spoken of as -lingerie.-
Cunnington, an early twentieth-century authority on fashion, argues that the Victorian matron was governed as much by current popular style as she was by instinct and custom. In a light, amusing, and highly readable account, he not only describes what Englishwomen wore in the nineteenth century but also explains why they clothed themselves as they did.
Enlivened with extracts from novels; correspondence from the columns of ladies' magazines; fashion descriptions and period advertisements of beauty aids; the volume traces changes in feminine dress and ideas decade by decade through the 1800s. The importance of being -in fashion- and the longing to imitate -- in appearance -- those in the same social group is closely examined, as is the desire to be sexually attractive and its counter-effort -- to conceal sexual features.
A carefully researched work on a fascinating subject, this volume will appeal to a wide audience, encompassing feminists, sociologists, fashion historians, and costume designers.