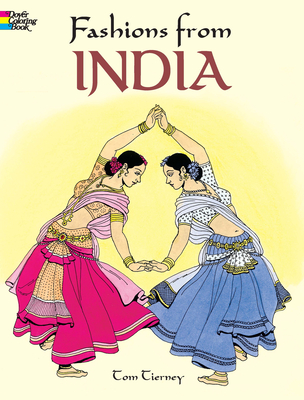 
Email or call for price.
An ancient land of many different ethnic groups, India is a country in which the clothing worn by its people has been defined by religion, caste, and class. Tom Tierney's carefully researched collection of 44 ready-to-color illustrations spotlights more than five centuries of fashions from the subcontinent's colorful past.
Meticulously adapted from rare sources predominantly portraying figures of royalty and their gods, the drawings depict such traditional outfits as the sari, a long, gracefully draped gown worn by women; full trousers tapering to the ankle, worn by both sexes; and jodphurs, trousers that have been westernized into riding breeches. Also shown are Pashmina shawls, turbans, fans made of peacock feathers, and swords, daggers, and other weapons.
A delightful collection of images for coloring book fans and admirers of Indian culture, these accurately rendered illustrations will also be useful to costume designers and fashion historians.
One of the leading authorities on fashion history, Tom Tierney created over 150 paper doll books for Dover Publications. With subjects ranging from U.S. Presidents to popular movie stars, Mr. Tierney's books are famous for being carefully researched and meticulously rendered. His releases are prized by fashion professionals, collectors, and paper doll lovers all over the world.