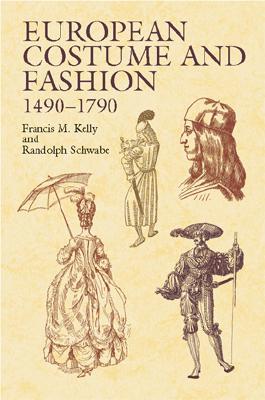 Unavailable
This authoritative guide carefully traces the evolution of apparel in Western Europe -- from the early Tudor period (1490) through part of the reign of George III (1790). Relying on period paintings and prints to illustrate various elements of clothing, the authors have meticulously dated every costume and detail.
Here are intriguing images and accounts of early sixteenth-century fashions for women and doublets, slashed sleeves, and hoods of mid-century; Spanish trunk hose, ruffs, and farthingales of the early 1600s; details of the reign of ribbon, the rise of the periwig, and the origin of modern suits for men; descriptions of cravats, parasols, and the bustle of the early eighteenth century; the reappearance of the hoop in the late 1700s, along with grandiose coiffures; the transformation of the wide-skirted coat into a tail-coat; and a host of other fashion trends. A valuable section on costume patterns, especially useful for community theater groups and pageant directors, is also included, as is a chronological table of French and English rulers.
Graphic artists and designers for the theater, motion pictures, and television will find the royalty-free illustrations in this comprehensive guide indispensable. Costume enthusiasts will delight in its pictorial coverage. The volume is "in fact ... the most desirable single book on its subject." -- Theatre Arts Monthly.