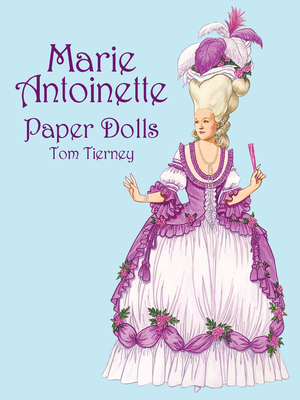 
Usually Ships in 1-5 Days
In addition to her role as queen of France, Marie Antoinette (1755-1793) could justly claim to rule the 18th-century fashion world. Directly behind her throne stood a savvy dressmaker, Rose Bertin, who helped transform the young Antoinette from a foreign princess into the epitome of French fashion and the most glamorous woman of her era.
Two figures portraying the queen and her dressmaker appear in this lavish paper doll collection, along with fifteen extraordinary costumes. These elegant ensembles attest to Rose Bertin's skills as a designer and her place as an innovator in fashion history. Her shop served as a center for the beau monde, and its displays of garments for an international clientele mark the first recorded showings of a couture collection. No one acted as a more conspicuous model than the ill-fated queen, who abandoned hoop skirts and monumental hairstyles in favor of her trademark style, magnificent renditions of the simple garb worn by shepherdesses and milkmaids.
These dazzling costumes, scrupulously researched and meticulously rendered, come with detailed descriptive notes, providing a treasury of historic fashions for paper doll fans and costume enthusiasts.

One of the leading authorities on fashion history, Tom Tierney created over 150 paper doll books for Dover Publications. With subjects ranging from U.S. Presidents to popular movie stars, Mr. Tierney's books are famous for being carefully researched and meticulously rendered. His releases are prized by fashion professionals, collectors, and paper doll lovers all over the world.