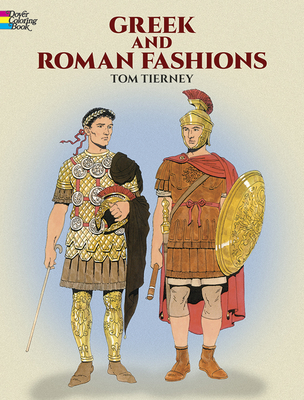 The classical lines of Greek and Roman fashions were as elegant as the art and architecture created by the artisans of these ancient Mediterranean civilizations. For his popular coloring-book series on the history of fashion, noted paper-doll illustrator Tom Tierney has carefully recreated a rich assortment of Greek and Roman clothing styles -- from garments worn by the nobility of Crete (2000-200 B.C.) to the apparel of a senator and his family in Rome's late imperial period (A.D. 300-487).
Also included are detailed, accurate portraits of Greek peasants in traditional clothing (1500-1000 B.C.), a Phrygian Amazon with shield and battle ax (ca. 1200-900 B.C.), Roman workers in simple tunics (ca. 750-300 B.C.), a Greek banquet guest and a dancing girl (ca. 500-400 B.C.), Roman gladiators wearing metal shoulder plates and chain mail (300 B.C.-A.D. 250), a Roman bride in a draped robe and veil (25 B.C.-A.D. 300 ), as well as Grecian and Roman hairstyles, headgear, footwear, and much more. Each plate is accompanied by fact-filled captions.

One of the leading authorities on fashion history, Tom Tierney created over 150 paper doll books for Dover Publications. With subjects ranging from U.S. Presidents to popular movie stars, Mr. Tierney's books are famous for being carefully researched and meticulously rendered. His releases are prized by fashion professionals, collectors, and paper doll lovers all over the world.