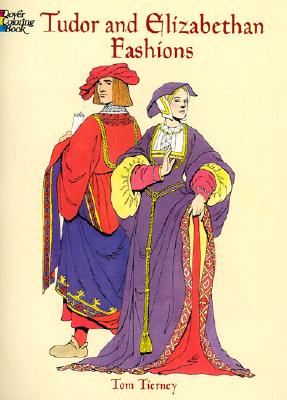 
Usually Ships in 1-5 Days
Spanning over a century of English history, the Tudor dynasty witnessed the steady growth and development of commerce between England and the European continent. One of the ways the resulting prosperity manifested itself was in the fashions worn by English monarchs and the growing middle class. That clothing is documented in this new addition to Dover's popular coloring book series on the history of fashion.
Encompassing clothing dating from the late fifteenth century to the early 1600s, 45 plates of accurate, ready-to-color illustrations depict apparel worn by a broad spectrum of English society -- from country workers in woolen tunics and leather boots and sailors in canvas breeches and shirts to officials in fur-trimmed robes and elegantly clad Tudor monarchs such as Henry VIII and his daughter, Elizabeth I. Also shown are numerous period hairstyles, headgear, shoes, gloves, jewelry, and other fashion accessories.
Accompanied by a fact-filled Introduction and identifying captions, these handsome, carefully researched and meticulously rendered illustrations will delight costume historians, fashion designers, and coloring book fans of all ages.
One of the leading authorities on fashion history, Tom Tierney created over 150 paper doll books for Dover Publications. With subjects ranging from U.S. Presidents to popular movie stars, Mr. Tierney's books are famous for being carefully researched and meticulously rendered. His releases are prized by fashion professionals, collectors, and paper doll lovers all over the world.