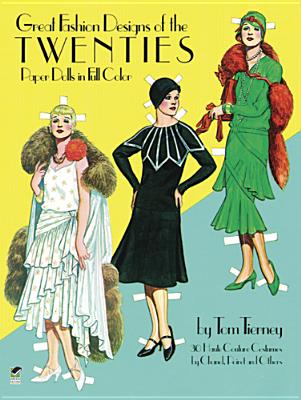 
Email or call for price.
Zelda and Scott Fitzgerald ... the Lost Generation ... illustrations by John Held, Jr. ... the It girl ... Lucky Lindy ... Louis Brooks ... prosperity, seemingly endless, and the inevitable crash. The twenties loom large in the American imagination as a decade unto itself, a brief span of years, but with a style all its own.
In this paper doll collection, noted fashion illustrator Tom Tierney brings back the style that set the twenties apart, at least in terms of haute couture. Here are the fashions that gave the decade its distinctive chic and, in the process, revolutionized women's wear. Gone is the elaborate corsetry of the Edwardian age, waistlines are lower, hemlines are higher and costume jewelry is de rigueur. Thirty meticulously re-created costumes and two dolls (15 costumes per doll) present the voguish looks established by such haute couture legends as Coco Chanel, Jean Patou, Madeleine Vionnet, Paul Poiret, Madame Paquin, Worth, Lelong, and 11 others. Paper doll collectors, costume fanciers, and fashion historians will appreciate this delightful collection of artfully rendered paper dolls and costumes.
One of the leading authorities on fashion history, Tom Tierney created over 150 paper doll books for Dover Publications. With subjects ranging from U.S. Presidents to popular movie stars, Mr. Tierney's books are famous for being carefully researched and meticulously rendered. His releases are prized by fashion professionals, collectors, and paper doll lovers all over the world.