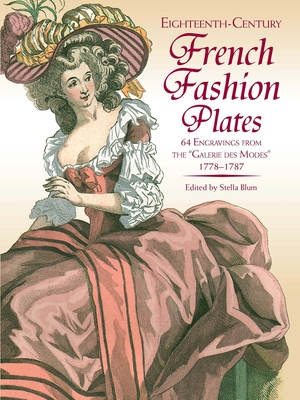 
Usually Ships in 1-5 Days
The Galerie des Modes has been called the "most beautiful collection in existence on the fashions of the eighteenth century." Published over a 10-year period, from 1778 to 1787, its plates were elegantly drawn, accurately engraved, and exquisitely hand colored by the most celebrated fashion artists of the era. This monument to costume illustration was reproduced by Emile L vy in Paris between 1911 and 1914. Here are 64 of the finest plates from the L vy edition, reproduced faithfully from the originals. Selected by costume historian Stella Blum, former Curator of Costumes at the Costume Institute of New York City's Metropolitan Museum of Art, they offer a splendid representation of French fashion in the late eighteenth century.
The great social, economic, and political changes of the turbulent period that led to the Revolution in 1789 were reflected in its fashions: the influence on traditional women's costume of the dress of servants and country women; the exotic costumes of actresses; and the simpler, more practical English styles. Men's fashions were also affected by the English as well as by the exaggerated Italianate fashions sported by foppish "macaronis." Children's fashions include the one-piece mantelot, interesting as a forerunner of the attire of the sans-culottes. Special fashion terms, many of which have been obscured by time, are defined in a Glossary.
Stella Blum (1916-85) was Curator of Costumes at the Costume Institute of New York City's Metropolitan Museum of Art.