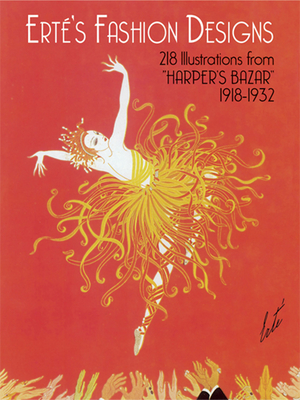 
Usually Ships in 1-5 Days
Ert once designed a costume for Mata Hari. Sixty-seven years later, still creating, he designed costumes and sets for the 1980 Glyndebourne Festival's Der Rosenkavalier. In between (mostly in the '20s) he was the only top Paris designer illustrating his own haute couture, most of the illustrations appearing in Harper's Bazar. An earlier volume (Fashion Drawings and Illustrations from Harper's Bazar 0-486-23397-9) sampled some of Ert 's enormous contributions to that magazine; this is another collection of original designs from Ert 's triumphant Harper's Bazar period.
He envisioned women, wrote Stella Blum, Metropolitan Museum of Art Costume Institute Curator, not only as ultra-chic creatures for whom money was no object, but also as . . . music hall stars, Assyrian princesses, Egyptian queens. . . . Yet under this veil of fantasy the clothes and accessories Ert created reveal a sound construction that really works. Ert loves elaborate decoration, but hates meaningless ornament; these 218 illustrations show how he integrates all his pockets, pearls, cuffs, fur linings, jeweled tassels, and seamless dresses into thematic unity, and maintains a consistent ideal of fashion, by constant improvisation and inventive wielding of pure line. His firework color sense finds spectacular realization in 8 full-color reproductions of Harper's Bazar covers, all of which are now prized collector's items. In both black-and-white and color work, his sinuous, undulating line and decorative flair never fail, and show why his fashion design has not only returned to popular favor, but is being seen in museums and galleries along with his paintings and prints.
Over a career spanning the century, Ert has expressed his versatility in many forms; in these exquisite, delicate, theatrical miniatures (which will delight any lover of fashion history and graphics) he gives the very best of himself.