Everyday Fashions of the Twenties: As Pictured in Sears and Other Catalogs (Dover Fashion and Costumes) (Paperback) 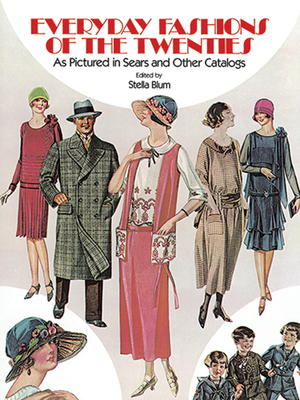 Everyday Fashions of the Twenties: As Pictured in Sears and Other Catalogs (Dover Fashion and Costumes) (Paperback)

The Roaring Twenties, age of jazz and flappers, Model T Fords and Hollywood movie stars, was also a time when for millions the bulky catalogs of Montgomery Ward or Sears, Roebuck were a substitute for the window displays of Paris or New York fashion shops. Buying clothing through the mails had become an American institution, and entire families were often dressed via the U.S. Post Office. More conservative than the up-to-the-minute fashion shops, mail-order catalogs nevertheless offered surprisingly much of the haute couture. But, above all, they accurately record what men, women, and children were actually wearing in the 1920s.
Now Stella Blum (Curator of the Costume Institute at the Metropolitan Museum of Art, New York) has distilled into this volume the essence of the fashion pages of the Sears, Roebuck and other mail-order catalogs of the Twenties. Her informative text and selection of over 150 representative catalog pages -- comprising over 750 illustrations with original captions -- gradually trace the evolution of dress modes from the vogue of stodgy postwar fashions to the impact on costume of the crash of '29. In a year-by-year survey, Mrs. Blum's introductory texts relate the trends in fashion to the social changes of the dynamic and restless era, assessing the influence of war and technological developments on the high hemlines, flattened busts and hips, geometric patterns and bobbed hairstyles of the boyish flapper look. And as she notes, it was through the Sears catalogs that Parisian designers like Coco Chanel, Jeanne Lanvin, and Madeleine Vionnet made their influence felt on Midwestern farms and in urban ghettos.
You'll find here a marvelous panorama of smart, modish, chic, stylish, and ultra fashionable apparel, as well as more traditional garments: for women and misses there are Middy blouses, Russian boots modeled by Gloria Swanson, Bob hats modeled by Clara Bow and Joan Crawford; coats, suits, dresses (including the first maternity dresses), sweaters, capes; silk and rayon stockings, corsets, chemises, camisoles, negligees; and accessories like necklaces, belts, combs, headbands, umbrellas, gloves, compacts, hand bags, wristwatches, and powderpuff cases. You'll see slower-to-change men's fashions -- shirts, ties, suits, sweaters, and sports clothes -- become trimmer, brighter, smarter. And you can follow the trends in children's fashions as well.
For historians of costume, nostalgia buffs, and casual browsers, these pages afford a rare picture -- unspoiled by recent myths about the Roaring Twenties -- of how average people really dressed in the jazz age.