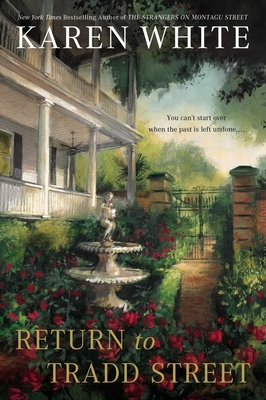 This is book number 4 in the Tradd Street series.

In the fourth novel in the New York Times bestselling Tradd Street series, Charleston realtor Melanie Middleton is determined to leave the past behind her. But history has a tendency of catching up with her, whether she likes it or not...

Melanie is only going through the motions of living since refusing Jack Trenholm’s marriage proposal. She misses him desperately, but her broken heart is the least of her problems. Despite an insistence that she can raise their child alone, Melanie is completely unprepared for motherhood, and she struggles to complete renovations on her house on Tradd Street before the baby arrives.

When Melanie is roused one night by the sound of a ghostly infant crying, she chooses to ignore it. She simply does not have the energy to deal with one more crisis. That is, until the remains of a newborn buried in an old christening gown are found hidden in the foundation of her house.

As the hauntings on Tradd Street slowly become more violent, Melanie decides to find out what caused the baby’s untimely death, uncovering the love, loss, and betrayal that color the house’s history—and threaten her claim of ownership. But can she seek Jack’s help without risking her heart? For in revealing the secrets of the past, Melanie also awakens the malevolent presence that has tried to keep the truth hidden for decades...
Karen White is the New York Times bestselling author of more than twenty novels, including the Tradd Street series, The Night the Lights Went Out, Flight Patterns, The Sound of Glass, A Long Time Gone, and The Time Between. She is the coauthor of The Forgotton Room with New York Times bestselling authors Beatriz Williams and Lauren Willig. She grew up in London but now lives with her husband and two children near Atlanta, Georgia.
Praise for New York Times bestselling author Karen White

“White’s dizzying carousel of a plot keeps those pages turning, so much so that the book can [be]—and should be—finished in one afternoon, interrupted only by a glass of sweet iced tea.”—Oprah.com

“White captures the true essence of Charleston by intertwining the sights and smells of the historic town with an enchanting story filled with ghostly spirits, love, and forgiveness…a once-in-a-lifetime series.”—Fresh Fiction

“This is storytelling of the highest order: the kind of book that leaves you both deeply satisfied and aching for more.”—Beatriz Williams, New York Times bestselling author of Tiny Little Thing