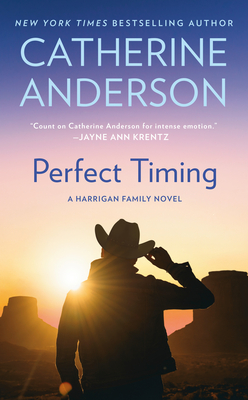 This is book number 4 in the Harrigan Family series.

An unlikely couple is brought together by circumstances that defy all reason in this timeless romance in the Harrigan Family series from New York Times bestselling author Catherine Anderson.

Tragedy has struck the Harrigans—Quincy’s beloved sister-in-law Loni is gravely ill and nearing death. Quincy, like his brothers, feels helpless to save her, and the clock is ticking. Then, with perfect timing, a winsome red-haired woman named Ceara O’Ceallaigh mysteriously appears on Quincy’s property and insists that Loni can be cured. Only Quincy, she says, as the sole remaining Harrigan bachelor, can make it happen—by marrying Ceara.

To Quincy, Ceara is a charming and quite likely deranged spinner of dreams who can’t prove she’s telling the truth. But how can he pass up any attempt to restore Loni to health? Against all better judgment, he decides to marry Ceara. Maybe he’s making the worst mistake of his life. Or maybe he’s opening himself up to possibilities that will send him on a miraculous journey toward enough love to last forever.
Catherine Anderson is the author of more than thirty New York Times bestselling and award-winning historical and contemporary romances including the Harrigan Family series, the Coulter Family series, the Comanche series, and the Mystic Creek series. She lives in the pristine woodlands of Central Oregon.
“Anderson’s long-running Harrigan Family series takes a most unusual turn by introducing a time-traveling Druidess. This updated take on the marriage-of-convenience plot is both uplifting and emotionally riveting. Dire events are threatening the Harrigan family, and longtime readers will worry right along with the protagonists. Get ready for one magically heartwarming experience!”—RT Book Reviews

“New readers will find it easy to catch up with established characters; returning readers will be enchanted.”—Publishers Weekly

“One of the finest writers of romance. Her stories make you believe in the power of love.”—#1 New York Times bestselling author Debbie Macomber

“Catherine Anderson has a gift for imbuing her characters with dignity, compassion, courage, and strength that inspire readers.”—RT Book Reviews

“A major voice in the romance genre.”—Publishers Weekly