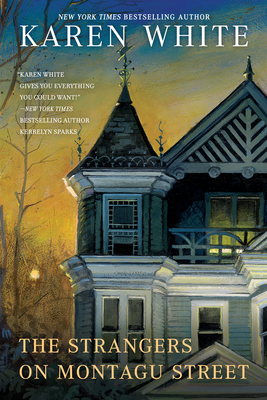 This is book number 3 in the Tradd Street series.

With her relationship with writer Jack Treholm as shaky as the foundation of her family home, Melanie’s juggling a number of problems. Like restoring her Tradd Street house...and resisting her mother’s pressure to ‘go public’ with her talent—a sixth sense that unites them to the lost souls of the dead. But Melanie never anticipated her new problem.

Her name is Nola, Jack’s estranged young daughter who appears on their doorstep, damaged, lonely and defiantly immune to her father’s attempts to reconnect. Melanie understands the emotional chasm all too well. As a special, bonding gift Jack’s mother buys Nola an antique dollhouse—a precious tableaux of a perfect Victorian family. Melanie hopes the gift will help thaw Nola’s reserve and draw her into the family she’s never known.

At first, Nola is charmed, and Melanie is delighted—until night falls, and the most unnerving shadows are cast within its miniature rooms. By the time Melanie senses a malevolent presence she fears it may already be too late. A new family has accepted her unwitting invitation to move in—with their own secrets, their own personal demons, and a past that’s drawing Nola into their own inescapable darkness...
Karen White is the New York Times bestselling author of more than twenty novels, including the Tradd Street series, The Night the Lights Went Out, Flight Patterns, The Sound of Glass, A Long Time Gone, and The Time Between. She is the coauthor of The Forgotton Room with New York Times bestselling authors Beatriz Williams and Lauren Willig. She grew up in London but now lives with her husband and two children near Atlanta, Georgia.
Praise for New York Times bestselling author Karen White

“White’s dizzying carousel of a plot keeps those pages turning, so much so that the book can [be]—and should be—finished in one afternoon, interrupted only by a glass of sweet iced tea.”—Oprah.com

“White captures the true essence of Charleston by intertwining the sights and smells of the historic town with an enchanting story filled with ghostly spirits, love, and forgiveness…a once-in-a-lifetime series.”—Fresh Fiction

“This is storytelling of the highest order: the kind of book that leaves you both deeply satisfied and aching for more.”—Beatriz Williams, New York Times bestselling author of Tiny Little Thing