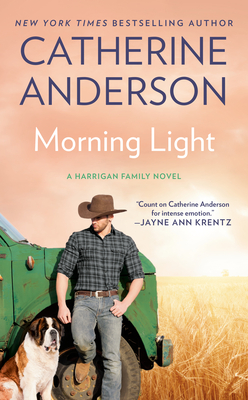 This is book number 1 in the Harrigan Family series.

Born with second sight, Loni MacEwen has vowed to ignore the visions that have brought her so much heartbreak.  Then she meets Clint Harrigan—and realizes she has no choice but to warn the handsome cowboy that his son is in danger.

A hardworking, no-nonsense rancher, Clint doesn’t believe the pretty stranger—especially since he doesn’t even have a son.  But then he sees the drama Loni predicted unfolding on the local news.  An orphaned boy is lost in the dense Oregon wilderness, and according to Loni, only Clint can save him.

Loni and Clint forge into the woods to find the lost boy.  As long nights follow exhausting days, their feelings grow stronger, and what began as a race against time becomes a shared journey of trust, understanding, and unexpected love…
Catherine Anderson is the author of more than thirty New York Times bestselling and award-winning historical and contemporary romances including the Harrigan Family series, the Coulter Family series, the Comanche series, and the Mystic Creek series. She lives in the pristine woodlands of Central Oregon.
Praise for Morning Light

“Heart-tugger extraordinaire Anderson adds a touch of the paranormal to this poignant and richly rewarding chapter in her Harrigan family series. A subtext to this race-against-time tale is how faith and accepting extraordinary gifts are not mutually exclusive.”—RT Book Reviews

“Veteran romance queen Anderson infuses the plot with all the warm and fuzzy woo-woo of TV's Ghost Whisperer."—Publishers Weekly

“One of the finest writers of romance. Her stories make you believe in the power of love.”—#1 New York Times bestselling author Debbie Macomber

“Catherine Anderson has a gift for imbuing her characters with dignity, compassion, courage, and strength that inspire readers.”—RT Book Reviews

“A major voice in the romance genre.”—Publishers Weekly