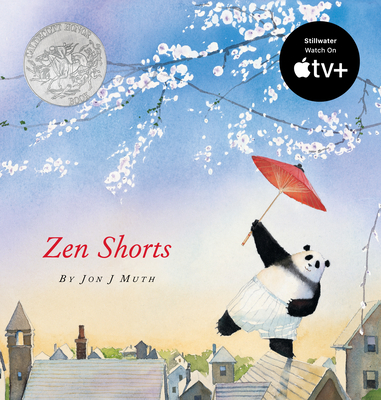 Stillwater, the beloved Zen panda, now in his own Apple TV+ original series!

Jon J Muth, author of the best-selling book, The Three Questions, has crafted another profound and winning picture book.

"Michael," said Karl. "There's a really big bear in the backyard." This is how three children meet Stillwater, a giant panda who moves into the neighborhood and tells amazing tales. To Addy he tells a story about the value of material goods. To Michael he pushes the boundaries of good and bad. And to Karl he demonstrates what it means to hold on to frustration. With graceful art and simple stories that are filled with love and enlightenment, Jon Muth -- and Stillwater the bear -- present three ancient Zen tales that are sure to strike a chord in everyone they touch.

Jon J Muth is beloved all over the world for his seven books featuring Stillwater the Panda, whose love and balanced approach to life always serve to make the world a better place for his young friends. Muth’s many enchanting picture books include his Caldecott Honor Book Zen Shorts, Addy’s Cup of Sugar, Stone Soup, and The Three Questions, which the New York Times Book Review called "quietly life-changing." His books have been translated into more than 15 languages and are cherished by readers of all ages. Muth draws inspiration from his life-long interest in Asian Studies, including tai chi chuan, sumi ink drawing and chado, "the way of tea."

Muth is also renowned in the world of graphic novels. He won an Eisner Award for his paintings in the graphic novel, The Mystery Play by Grant Morrison. He’s partnered with Neil Gaiman on The Sandman: The Wake, Walter and Louise Simonson, and Kent Williams on Havoc & Wolverine: Meltdown, J. M. DeMatteis on Moonshadow and Silver Surfer, and with Stanislaw Lem on The Seventh Voyage which was nominated for an Eisner Award for Best Adaptation in Another Medium. He lives in New York State with his wife and their four children.

* "An accessible, strikingly illustrated story and a thought-provoking meditation." -- Booklist, starred review
* "Every word and image comes to make as perfect a picture book as can be." -- Kirkus Reviews, starred review
"Readers will fall easily into the rhythm of visits to Stillwater and his storytelling sessions, and many more will fall in love with the panda, whose shape and size offer the children many opportunities for cuddling." -- Publishers Weekly
"Beautifully illustrated in two distinct styles, this book introduces readers to a Zen approach to the world, wrapped in a story about three siblings and their new neighbor, a panda....Appealing enough for a group read-aloud, but also begging to be shared and discussed by caregiver and child, Zen Shorts is a notable achievement." -- School Library Journal