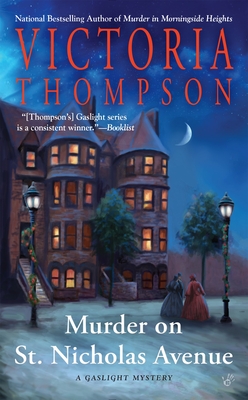 This is book number 18 in the A Gaslight Mystery series.

The author of City of Lies returns to nineteenth-century New York City to find Christmas in the air, a police detective and a midwife with love in their hearts, and a wealthy widow accused of murder…

Detective Sergeant Frank Malloy and Sarah Brandt aren’t the only ones who’ve recently tied the knot. Family friend Mrs. O’Neill was delighted when her daughter, Una, wed the seemingly wealthy and charming Randolph Pollock. But there’s a problem. Una was found cradling her dead husband’s body. Rendered mute by the ordeal, she cannot explain what happened and now stands charged with murder.

Mrs. O’Neill would like Frank to investigate the case and save Una, yet with Frank and Sarah still on their honeymoon, it’s up to the other members of their newly formed household to do some detective work. But solving the mystery behind Pollock’s death means first discovering the truth about who he really is...
Victoria Thompson is the Edgar® and Agatha award–nominated author of the Gaslight Mysteries, the Counterfeit Lady series, and twenty additional historical novels. She lives in Illinois with her family and a very spoiled little dog.
Praise for Murder on St. Nicholas Avenue

“Thompson is expert at combining details about the era’s history as well as social details of many segments of New York society, allowing the story to paint a vivid picture of people often left out of similar books.”—RT Book Reviews (4 1/2 stars, Top Pick)

Praise for the Edgar® and Agatha award-nominated Gaslight Mysteries

“WITH WRITING THIS GOOD, I would recommend not missing a single Thompson tale.”—Suspense Magazine