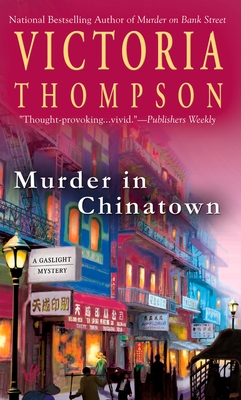 This is book number 9 in the A Gaslight Mystery series.

In Chinatown to deliver a baby, Sarah Brandt meets a group of women she might otherwise never have come across: Irish girls who, after alighting on Ellis Island alone, have married Chinese men in the same predicament. But with bigotry in New York from every side, their mixed-race children are often treated badly, by the Irish, the Chinese—even the police.

When the new mother’s half-Chinese, half-Irish, 15-year-old niece goes missing, Sarah knows that alerting the constables would prove futile. So she turns to Detective Sergeant Frank Malloy—and together they begin the search themselves. And after they find her, dead in an alley, Sarah and Malloy have ample suspects—from both sides of Canal Street.
Victoria Thompson is the Edgar(r) Award-nominated author of the Gaslight mystery series and 20 additional historical novels. She lives in Pennsylvania with her family.