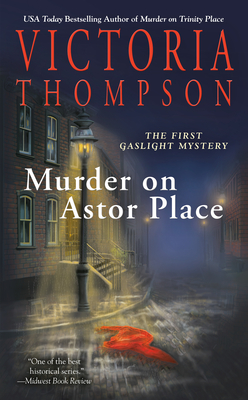 This is book number 1 in the A Gaslight Mystery series.

The first novel in the national bestselling Gaslight Mystery series introduces Sarah Brandt, a midwife in the turn-of-the-century tenements of Manhattan who refuses to turn a blind eye to the injustices of the crime-ridden city…

After a routine delivery, Sarah visits her patient in a rooming house—and discovers that another boarder, a young girl, has been killed. At the request of Sergeant Frank Malloy, she searches the girl’s room. She discovers that the victim is from one of the most prominent families in New York—and the sister of an old friend. The powerful family, fearful of scandal, refuses to permit an investigation. But with Malloy’s help, Sarah begins a dangerous quest to bring the killer to justice—before death claims another victim...
Victoria Thompson is the Edgar® and Agatha award–nominated author of the Gaslight Mysteries and twenty additional historical novels. She lives in Illinois with her family and a very spoiled little dog.
Praise for the Edgar® and Agatha Award-nominated Gaslight Mysteries

“THOMPSON'S COMMAND OF PERIOD DETAIL...put[s] her in the forefront of historical mystery writers.”—Publishers Weekly

“[A] FASCINATING window into a bygone era.”—Kirkus Reviews