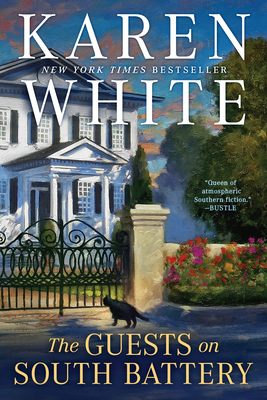 This is book number 5 in the Tradd Street series.

Karen White invites you to explore the brick-walked streets of Charleston in her fifth Tradd Street novel, where historic mansions house the memories of years gone by, and restless spirits refuse to fade away...

With her extended maternity leave at its end, Melanie Trenholm is less than thrilled to leave her new husband and beautiful twins to return to work, especially when she’s awoken by a phone call with no voice on the other end—and the uneasy feeling that the ghostly apparitions that have stayed silent for more than a year are about to invade her life once more.

But her return to the realty office goes better than she could have hoped, with a new client eager to sell the home she recently inherited on South Battery. Most would treasure living in one of the grandest old homes in the famous historic district of Charleston, but Jayne Smith would rather sell hers as soon as possible, guaranteeing Melanie a quick commission.

Despite her stroke of luck, Melanie can’t deny that spirits—both malevolent and benign—have started to show themselves to her again. One is shrouded from sight, but appears whenever Jayne is near. Another arrives when an old cistern is discovered in Melanie’s backyard on Tradd Street.

Melanie knows nothing good can come from unearthing the past. But some secrets refuse to stay buried....
Karen White is the New York Times bestselling author of more than twenty novels, including the Tradd Street series, Dreams of Falling, The Night the Lights Went Out, Flight Patterns, The Sound of Glass, A Long Time Gone, and The Time Between. She is the coauthor of The Forgotton Room and The Glass Ocean with New York Times bestselling authors Beatriz Williams and Lauren Willig. She grew up in London but now lives with her husband and two children near Atlanta, Georgia.
Praise for The Guests on South Battery

“From the beginning of this page-turner to the spine-tingling, breath-stealing battle ending, White’s master storytelling and sophisticated dialogue will ensnare readers...The side characters are brilliant in their own right, each one playing an intricate role in the tale. But as with each novel in this series, it’s the compulsive, insecure but constantly self-improving protagonist Melanie who is the show-stealer—although now she shares the stage with her ever-growing family.”—RT Book Reviews

“One of the most highly anticipated books of the new year...White’s writing just gets better and better.”—The Huffington Post

“Readers will be kept enthralled with the scenes of historic Southern houses and spooky happenings....[Karen White] never disappoints with her spellbinding plot and cast of characters.”—Crimespree Magazine

“Karen White is a queen of atmospheric Southern fiction, and nowhere is that more apparent than in her Tradd Street series.”—Bustle

“White captures the true essence of Charleston by intertwining the sights and smells of the historic town with an enchanting story filled with ghostly spirits, love, and forgiveness...a once-in-a-lifetime series.”—Fresh Fiction

“This is storytelling of the highest order: the kind of book that leaves you both deeply satisfied and aching for more.”—New York Times bestselling author Beatriz Williams