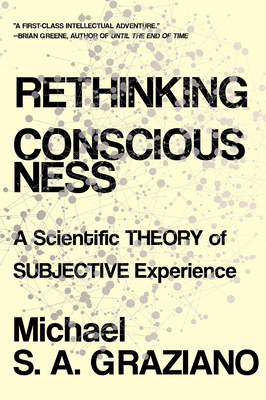 By Michael S A. Graziano

“A first-class intellectual adventure.” —Brian Greene, author of Until the End of Time

Illuminating his groundbreaking theory of consciousness, known as the attention schema theory, Michael S. A. Graziano traces the evolution of the mind over millions of years, with examples from the natural world, to show how neurons first allowed animals to develop simple forms of attention and then to construct awareness of the external world and of the self. His theory has fascinating implications for the future: it may point the way to engineers for building consciousness artificially, and even someday taking the natural consciousness of a person and uploading it into a machine for a digital afterlife.

Michael S. A. Graziano is a professor of psychology and neuroscience at Princeton University. The author of four previous neuroscience books, he lives in Princeton, New Jersey.
Graziano’s attention schema theory marks a milestone by offering a plausible, mechanistic answer to the hard problem [of consciousness].
— Aaron Schurger - Science

Brilliant. Michael Graziano is indeed ‘rethinking consciousness’ and will probably make the rest of us do the same. His new approach may just drag us out of the mire into which consciousness studies have been wallowing for so long.
— Susan Blackmore, author of Consciousness: A Very Short Introduction