The Seven Daughters of Eve: The Science That Reveals Our Genetic Ancestry (Paperback) 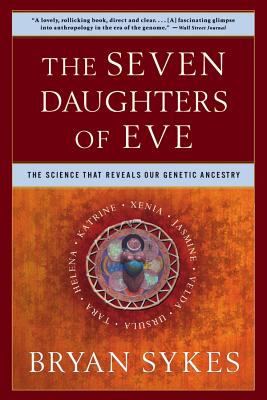 The Seven Daughters of Eve: The Science That Reveals Our Genetic Ancestry (Paperback)

The national bestseller that reveals how we are descended from seven prehistoric women.

In 1994 Bryan Sykes was called in as an expert to examine the frozen remains of a man trapped in glacial ice in northern Italy for over 5000 years—the Ice Man. Sykes succeeded in extracting DNA from the Ice Man, but even more important, writes Science News, was his "ability to directly link that DNA to Europeans living today." In this groundbreaking book, Sykes reveals how the identification of a particular strand of DNA that passes unbroken through the maternal line allows scientists to trace our genetic makeup all the way back to prehistoric times—to seven primeval women, the "seven daughters of Eve."

Bryan Sykes, professor of human genetics at Oxford University, pioneered the use of DNA in exploring the human past. He is the author of Saxons, Vikings, and Celts and the New York Times bestseller The Seven Daughters of Eve.
A lovely, rollicking book, direct and clear.... [A] fascinating glimpse into anthropology in the era of the genome.
— Wall Street Journal

Sykes recounts his tale of discovery with the drama it warrants...gripping.
— New York Times Book Review

Scientifically accurate and understandable to the layperson.... [The Seven Daughters of Eve] will be recognized as an important work, bringing molecular anthropology to a mass audience.

A natural storyteller, [Sykes] relates the history of developing genetics up to contemporary times as the DNA of genes is decoded.... A riveting account showing how archeological evidence and molecular biology findings complement one another in the challenge to unearth our past and our beginnings.
— Choice

Sykes has solved some of the hottest debates about human origins.
— Publishers Weekly