Lord John and the Brotherhood of the Blade: A Novel (Lord John Grey #2) (Paperback) 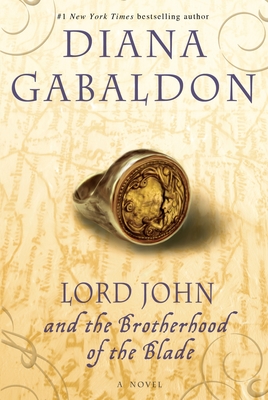 Lord John and the Brotherhood of the Blade: A Novel (Lord John Grey #2) (Paperback)

This is book number 2 in the Lord John Grey series.

Diana Gabaldon, the #1 New York Times bestselling author of the Outlander saga, brings back one of her most compelling characters: Lord John Grey. Here Gabaldon weaves together the strands of Lord John’s secret and public lives—a shattering family mystery, a love affair with potentially disastrous consequences, and a war that stretches from the Old World to the New.

It’s been seventeen years since Lord John’s father, the Duke of Pardloe, was found dead, a pistol in his hand and accusations of his role as a Jacobite agent staining forever a family’s honor. Now unlaid ghosts from the past are stirring. Lord John’s brother has mysteriously received a page of their late father’s missing diary—and John is convinced that someone is taunting the Grey family with secrets from the grave. So he turns to the only man he can trust: the Scottish Jacobite James Fraser. But war, a forbidden affair, and Fraser’s own secrets will complicate Lord John’s quest—until James Fraser yields the missing piece of an astounding puzzle and Lord John must decide whether his family’s honor is worth his life.

Diana Gabaldon is the #1 New York Times bestselling author of the wildly popular Outlander novels—Outlander, Dragonfly in Amber, Voyager, Drums of Autumn, The Fiery Cross, A Breath of Snow and Ashes (for which she won a Quill Award and the Corine International Book Prize), An Echo in the Bone, and Written in My Own Heart’s Blood—as well as a collection of Outlander fiction, Seven Stones to Stand or Fall; the related Lord John Grey books Lord John and the Private Matter, Lord John and the Brotherhood of the Blade, Lord John and the Hand of Devils, and The Scottish Prisoner; two works of nonfiction, The Outlandish Companion, Volumes 1 and 2; the Outlander graphic novel, The Exile; and The Official Outlander Coloring Book. She lives in Scottsdale, Arizona, with her husband.

“Strongly recommended . . . Gabaldon’s expert knowledge of her time period and delicate feel for the intricacies of human behavior make this second Grey novel as enjoyable as the first.”—Library Journal