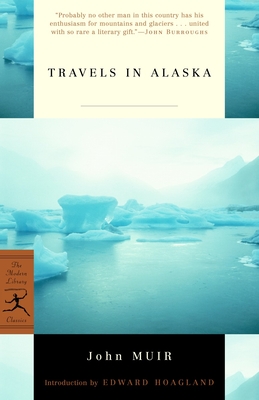 
On Our Shelves Now
In the late 1800s, John Muir made several trips to the pristine, relatively unexplored territory of Alaska, irresistibly drawn to its awe-inspiring glaciers and its wild menagerie of bears, bald eagles, wolves, and whales. Half-poet and half-geologist, he recorded his experiences and reflections in Travels in Alaska, a work he was in the process of completing at the time of his death in 1914. As Edward Hoagland writes in his Introduction, “A century and a quarter later, we are reading [Muir’s] account because there in the glorious fiords . . . he is at our elbow, nudging us along, prompting us to understand that heaven is on earth—is the Earth—and rapture is the sensible response wherever a clear line of sight remains.”

This Modern Library Paperback Classic includes photographs from the original 1915 edition.
Edward Hoagland is the author of Notes from the Century Before (a Modern Library paperback) and nearly twenty other books on nature and exploration. He lives in Bennington, Vermont.
“Probably no other man in this country has his enthusiasm for mountains and glaciers . . . united with so rare a literary gift.”—John Burroughs