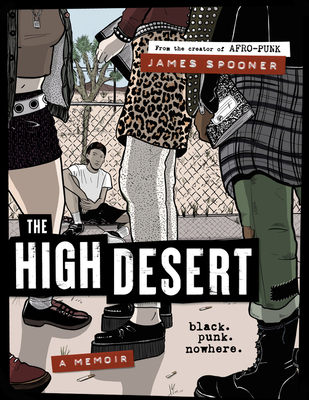 A formative coming-of-age graphic memoir by the creator of Afro-punk: a young man’s immersive reckoning with identity, racism, clumsy teen love and belonging in an isolated California desert, and a search for salvation and community through punk.

Teenage James Spooner hates that he and his mom are back in town after years away. The one silver lining—new school, new you, right? But the few Black kids at school seem to be gangbanging, and the other kids fall on a spectrum of micro-aggressors to future Neo-Nazis. Mixed race, acutely aware of his Blackness, James doesn't know where he fits until he meets Ty, a young Black punk who introduces him to the school outsiders—skaters, unhappy young rebels, caught up in the punk groundswell sweeping the country.

A haircut, a few Sex Pistols, Misfits and Black Flag records later: suddenly, James has friends, romantic prospects, and knows the difference between a bass and a guitar. But this desolate landscape hides brutal, building undercurrents: a classmate overdoses, a friend must prove himself to his white supremacist brother and the local Aryan brotherhood through a show of violence. Everything and everyone are set to collide at one of the year's biggest shows in town...

Weaving in the Black roots of punk rock and a vivid interlude in the thriving eighties DIY scene in New York's East Village, this is the memoir of a budding punk, artist, and activist.

JAMES SPOONER is an accomplished tattoo artist, illustrator, and filmmaker. He directed the seminal documentary Afro-Punk. Spooner is also the co-founder of the Afro-punk Festival. Spooner’s work has appeared in NPR, Vice, The Village Voice, The New Yorker, Vibe, Fader, MTV, NBC News, and Variety. He is an ongoing guest curator for the Broad Museum in Los Angeles, and previously programmed for the Brooklyn Academy of Music.

"Punk is James Spooner’s salvation as he comes of age in a racist world, but punk culture is also a microcosm of that world. The path to reconciliation—with himself, his parents, his peers—is navigated with exquisite nuance and compassion. A beautifully drawn story."  — Alison Bechdel, author of Fun Home

"A rewarding journey of identity, creativity and self-determination." — Washington Post

“Deeply relatable...it is genuinely therapeutic to read about James Spooner’s experiences: being in proximity to white supremacy, the exceptions that are made in small town, USA, and how quickly violence can escalate. Man oh man. The High Desert hits so deep.”  — Kimya Dawson, Moldy Peaches

"Like most coming-of-age books, 'The High Desert' is the saga of a square peg. What differentiates Spooner’s memoir is its bold confrontation of race." — Los Angeles Times

"James Spooner’s documentary AFRO-PUNK not only exposed racism in the punk scene, it inspired a movement that centered Black and Brown punks everywhere. In his new memoir, we learn about the major pitfalls and minor triumphs that put Spooner on the path to realize his dream of an all Black mosh pit. Beautifully written and illustrated The High Desert is a must-have for every music fan. After I finished reading it I kept wishing a second, third and fourth volume would magically appear so it didn’t have to end." — Kathleen Hanna, Bikini Kill & Le Tigre

“This beautifully paced graphic memoir illustrates the struggle and joy of finding self-acceptance and community on the fringes. It perfectly captures the innocence, camaraderie, and trauma of being a punk of color in the late eighties and early nineties. I couldn’t look away.” — MariNaomi, author and illustrator of Losing the Girl

"Washington DC is a long way from Apple Valley and the circumstances of James’ introduction to the punk underground are vastly different than mine, but there’s something so recognizable in The High Desert that I felt like I was there. I suspect in a way we were all there at one time in our lives, navigating and negotiating as we figured out just who the fuck we were and who was with us. I loved this book." — Ian MacKaye, Minor Threat & Fugazi

“In each panel of The High Desert, James Spooner delivers magic between his art and his words, mixing the intense passions of youth with the hindsight of the wise. Gorgeously drawn, brutally honest, and as emotionally raw as your favorite punk song.”  — Dawnie Walton, author of The Final Revival of Opal & Nev

“A coming of age tale of the very precarious faultlines of growing up an outsider amongst outsiders: The High Desert is an American tale of race, politics, counter-culture, and the tender and personal story of Black adolescence rarely told.” — Brontez Purnell, author of 100 Boyfriends

"This reminds me of how punk can pull us out of a pit, give us legs to dance on, and words to scream with our dumb drunk beautiful friends. This already feels like a classic." — Ben Passmore, author of BTTM FDRS and Your Black Friend

“[A] probing graphic memoir. . . . . Spooner is a discerning student of his own past and the movement he joined. . . .[An] eloquent latter-day rejoinder to Chuck Klosterman’s Fargo Rock City. A lively, inspirational tale that will point readers toward art, music, and resistance of their own.”  — Kirkus Reviews (starred review)

“Much like Ghost World, this grabbing, angsty coming-of-age tale offers a sidewalk view of a creative subculture. It’s also a poignant ode to the power of music to fill voids left by family and circumstance, with provocations thrumming on race and identity that sound out like a smashed guitar.” — Publishers Weekly (starred review)

"A masterful debut that's just as captivating as it is inspiring. Spooner paints a world that's irresistible and harrowing, and fills it with the kind of honesty that defines every great graphic memoir." — Ezra Claytan Daniels, author of BTTM FDRS

"James Spooner’s The High Desert has all the marks of a classic Black punk coming-of-age story. What makes this graphic novel extra special is Spooner’s thoughtful observations about the ways that Black kids have to flatten themselves to feel safe in hostile white spaces. If you’ve ever had to fight to be yourself, this book is for you." — Chris L. Terry, author of Black Card and Zero Fade

"The High Desert is a memoir for music lovers. Spooner brings readers along on the punk journey of his younger self, blazing lyrics across the pages; the larger the writing, the louder the volume." — departures.com

"His freshly told and achingly vulnerable graphic memoir illustrates his adolescence as being an outcast many times over...Spooner’s narration is endearingly earnest and honest feeling, whether pining after the cool Goth girl at the video store or exulting in discovering countercultural meccas like the East Village and Venice Beach." — Star Tribune

"I always love a good ‘punk kid coming of age’ tale and the 350+ pages of this kept me reading pretty much non-stop to the end."  — Hanging Hex

"Perfect for fans of music history, as well anyone who’s ever been looking for their place to fit in." — Book Riot

"A must-read for fans of punk music." — "The Hub" at the Young Adult Library Services Association.