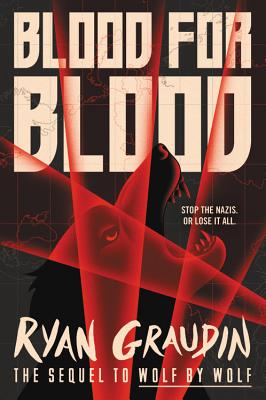 This is book number 2 in the Wolf by Wolf series.

The action-packed, thrilling sequel to Ryan Graudin's Wolf by Wolf.

There would be blood.

An entire world of it.

For the resistance in 1950s Germany, the war may be over, but the fight has just begun.

Death camp survivor Yael, who has the power to skinshift, is on the run: The world has just seen her shoot and kill Hitler. But the truth of what happened is far more complicated, and its consequences are deadly. Yael and her unlikely comrades dive into enemy territory to try to turn the tide against the New Order, and there is no alternative but to see their mission through to the end, whatever the cost.

But in the midst of the chaos, Yael's past and future collide when she comes face-to-face with a ghost from her past, and a spark with a fellow rider begins to grow into something more. Dark secrets reveal dark truths, and one question hangs over them all--how far can you go for the ones you love?

This gripping, thought-provoking conclusion to Wolf by Wolf will grab readers by the throat with its cinematic writing, fast-paced action, and relentless twists.

"Wild and gorgeous, vivid and consuming. I loved it! I can't wait for the sequel."--Laini Taylor, New York Times bestselling author of the Daughter of Smoke & Bone trilogy, on Wolf by Wolf

Ryan Graudin was born in Charleston, SC with a severe case of wanderlust. When she's not traveling, she's busy photographing weddings, writing, and spending time with her husband and wolf-dog. She is the author of The Walled City, Wolf by Wolf, and Blood for Blood. You can visit her online at ryangraudin.com.

* "Graudin's writing is beautiful, her story exciting and consuming all at once, and this sequel to Wolf by Wolf (2015) is not to be missed."—Booklist, starred review

Praise for Wolf by Wolf:
"Wild and gorgeous, vivid and consuming. I loved it! I can't wait for the sequel."
—Laini Taylor, New York Times bestselling author of the Daughter of Smoke & Bone trilogy

"Ryan Graudin opens one of the darkest chapters in history and spins a what if into an incredible tale of survival, identity, and purpose. This is the kind of book you can't put down, and the kind that follows you long after you have. It is, quite simply, a masterpiece."
—Victoria Schwab, author of The Archived, Vicious, and A Darker Shade of Magic

*"Graudin (The Walled City) crafts another fast-paced, enthralling tale of sacrifice and dogged determination as she fuses alternate history and spy-thriller suspense. A provocative rumination on self-preservation, the greater good, and the boundaries that keep heroes from becoming as cruel as those they fight."—Publishers Weekly (starred review)