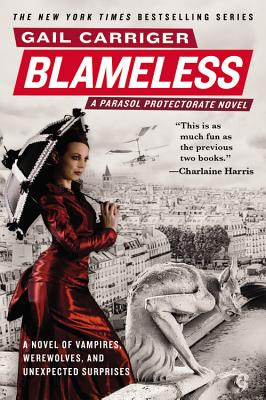 This is book number 3 in the The Parasol Protectorate series.

Quitting her husband's house and moving back in with her horrible family, Lady Maccon becomes the scandal of the London season in the third book of the NYT bestselling Parasol Protectorate series.

Queen Victoria dismisses her from the Shadow Council, and the only person who can explain anything, Lord Akeldama, unexpectedly leaves town. To top it all off, Alexia is attacked by homicidal mechanical ladybugs, indicating, as only ladybugs can, the fact that all of London's vampires are now very much interested in seeing Alexia quite thoroughly dead.

While Lord Maccon elects to get progressively more inebriated and Professor Lyall desperately tries to hold the Woolsey werewolf pack together, Alexia flees England for Italy in search of the mysterious Templars. Only they know enough about the preternatural to explain her increasingly inconvenient condition, but they may be worse than the vampires -- and they're armed with pesto.

Blameless is the third book of the Parasol Protectorate series: a comedy of manners set in Victorian London, full of werewolves, vampires, dirigibles, and tea-drinking.
New York Times bestselling author Gail Carriger writes to cope with being raised in obscurity by an expatriate Brit and an incurable curmudgeon. She escaped small town life and inadvertently acquired several degrees in Higher Learning. Ms. Carriger then traveled the historic cities of Europe, subsisting entirely on biscuits secreted in her handbag. She resides in the Colonies, surrounded by fantastic shoes, where she insists on tea imported from London.
"Soulless is a character-driven romp with great worldbuilding and delicious rapier wit that recalls Austen and P.G. Wodehouse."— io9.com on Soulless

"The dialogue is as smart and snappy as ever, full of intelligent humor and artful verbal sparring."—All Things Urban Fantasy on Changeless

"A tapestry that is simultaneously witty, charming, exhilarating and downright fun."—fantasyliterature.com on Blameless

"This is as much fun as the previous two books."—Charlaine Harris on Blameless