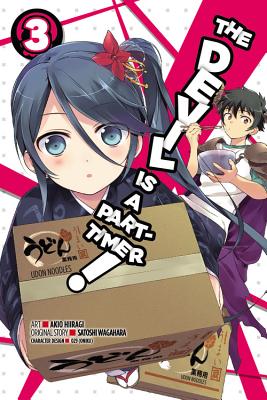 This is book number 3 in the The Devil Is a Part-Timer! Manga series.

Speak of the devil, and he'll fry you a burger!
Sadao Maou, (aka Satan, the Devil King) has been relegated to flipping burgers at a MgRonald in suburban Tokyo. His greatest challenge so far, though, comes when a Sentucky Fried Chicken opens up across the street. Maou once led the forces of darkness, but can he triumph over the forces of chicken? And the new girl next door seems awfully polite and proper, almost as if she were hiding something...
Akio Hiiragi is the artist behind the manga adaptation of the hilarious fantasy light novel series, The Devil is a Part-Timer!

Satoshi Wagahara is the author behind the hilarious fantasy light novel series, The Devil is a Part-timer!