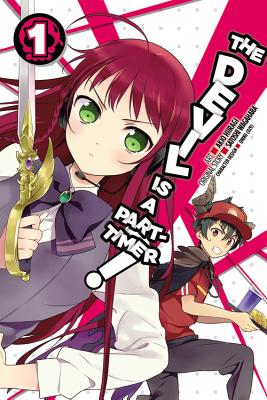 This is book number 1 in the The Devil Is a Part-Timer! Manga series.

It's tough being evil when you have to pay the rent! This comical tale of a demon-lord-turned-fry-slinger follows the daily travails of (former) Devil King Sadao Maou and his general Shiro Ashiya as they navigate the complexities of life in modern-day Tokyo. Having suffered utter defeat at the hands of a plucky hero, they've been banished to earth and stripped of magical power. And if that wasn't enough, that pesky hero is still hell bent on finishing the job. Artist Akio Hiiragi brings Satoshi Wagahara's story to hilarious life in this manga adaptation of the hit light novel series. It turns out crushing your enemies beneath your feet is tricky when you haven't even made manager yet!
Akio Hiiragi is the artist behind the manga adaptation of the hilarious fantasy light novel series, The Devil is a Part-Timer! Satoshi Wagahara is the author behind the hilarious fantasy light novel series, The Devil is a Part-timer!