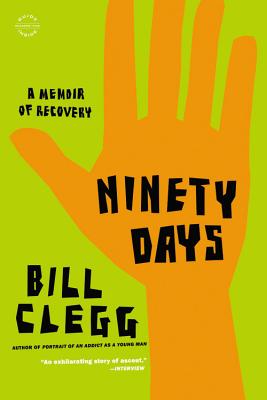 The goal is ninety. Just ninety clean and sober days to loosen the hold of the addiction that caused Bill Clegg to lose everything. With six weeks of his most recent rehab behind him he returns to New York and attends two or three meetings each day. It is in these refuges that he befriends essential allies including Polly, who struggles daily with her own cycle of recovery and relapse, and the seemingly unshakably sober Asa.

At first, the support is not enough: Clegg relapses with only three days left. Written with uncompromised immediacy, Ninety Days begins where Portrait of an Addict as a Young Man ends-and tells the wrenching story of Clegg's battle to reclaim his life. As any recovering addict knows, hitting rock bottom is just the beginning.

Bill Clegg is a literary agent in New York. He is the author of Portrait of an Addict as a Young Man and Ninety Days.

"Clegg has a direct, spare style and an engaging voice that is reminiscent, at least to me, of Jean Rhys in her fictional addiction book Good Morning, Midnight. It is because of this immediacy that Ninety Days turns out to be such an exhilarating story of ascent."—Interview Magazine

"Clegg has rebuilt his career as an agent and become one of the best-known faces of addiction recovery."
—Salon.com

"Relationships, rather than high drama, are the real focus of Ninety Days, and as a result there is a tenderness at its heart."—Vogue.com

"Clegg's need to connect saves him....What he has now - fewer secrets, gratitude, relief, an acknowledgement of his vulnerability, time out from his dance with death - adds up, like days."
—San Francisco Chronicle

"[Clegg] tells the story in plain, innocence-drenched sentences that bring to mind the wonderful Edmund White, as if to adorn the events would be dishonest."
—The Daily Beast