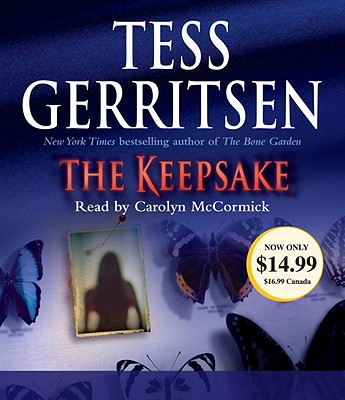 This is book number 7 in the Rizzoli & Isles series.

For untold years, the perfectly preserved mummy had lain forgotten in the dusty basement of Boston’s Crispin Museum. Dubbed “Madam X,” the recently rediscovered mummy is, to all appearances, an ancient Egyptian artifact. But medical examiner Maura Isles discovers a macabre message hidden within the corpse–horrifying proof that this “centuries-old” relic is instead a modern-day murder victim. When the grisly remains of two other women are found, it becomes clear to Maura and Boston homicide detective Jane Rizzoli that a maniac is at large. Now Maura and Jane must unravel a murderer’s twisted endgame before the Archaeology Killer adds another chilling artifact to his monstrous collection.
New York Times bestselling author Tess Gerritsen earned international acclaim for her first novel of suspense, Harvest. She introduced detective Jane Rizzoli in The Surgeon (2001) and Dr. Maura Isles in The Apprentice (2002) and has gone on to write numerous other titles in the celebrated Rizzoli & Isles series, including The Mephisto Club, The Keepsake, Ice Cold, The Silent Girl, Last to Die, and Die Again. Her latest novel is the standalone thriller Playing with Fire. A physician, Tess Gerritsen lives in Maine.
“A frighteningly effective stunner from one of the most versatile voices in thriller fiction today.”—Providence Journal

“An intricate plot that will keep readers guessing.”—Publishers Weekly

“Wraps readers in a web of evil that is hard to shake . . . Once you pick up this novel, there’s a good chance you won’t be good for much else till you’ve reached its satisfying conclusion.”—Nashville Scene

“The Keepsake reads at a reckless pace, drawing the reader into a twisted world of well-preserved vengeance.”—Madison County Times

“The Keepsake is a superb suspense novel, with twists galore . . . a beautifully constructed suspense novel with a great story.”—Toronto Globe and Mail