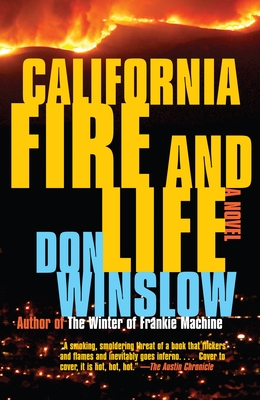 FROM THE BESTSELLING AUTHOR OF THE CARTEL.

When Jack Wade is called in to examine a suspicious arson claim, he follows the evidence into the crime infested inferno of the California underworld.

Jack Wade was the rising star of the Orange County Sheriffs Department’s arson unit, but a minor scandal cost him everything, except his encyclopedic knowledge of fire. Now working as an insurance claims investigator, Jack is called in to examine a suspicious claim: within hours of a disastrous blaze tearing through a wing of real estate mogul Nicky Vale’s house— causing the horrific death of his young wife—he filed a 3 million-dollar insurance claim. The tracks of the fire tell Jack that something's wrong, and as he follows the evidence the case grows to involve the Russian mob, Vietnamese gangs, real estate scams, counterfeiting and corporate corruption.

Things get so hot and deadly that Jack might not make it out alive . . . that is until he decides to fight fire with fire.

“A smoking, smoldering threat of a book that flickers and flames and inevitably goes inferno. . . . Cover to cover, it is hot, hot, hot.” —Austin Chronicle

“The best crime thriller of the year. . . . Mixes two parts of Elmore Leonard with an equal portion of Carl Hiaasen to form an irreverent, ribald hybrid of a thriller that's pure fun.”
—The Providence Journal

“A jazzy California thriller. . . . Think Philip Marlowe if he were still sleuthing--and had taken up surfing.”
—Entertainment Weekly (Editor's Choice)